Rocking out: Sleepy Porthcawl in Wales turns out to be a daredevil rock climbing destination

My left toes are stuffed into a crack in the stone, both hands are gripping a tiny nub of rock and my right foot is … well, letting me down ­– swinging, scrabbling and slipping against the cliff face in a vain attempt to find something solid to rest on. I can feel the strength draining out of my arms.

Dan Hobbs is belaying from above and shouting encouragement, pointing at a good hold just a little above my head. “OK, fuck, OK, OK fuck,” I mutter to myself. I lurch for it, miss, and it’s game over. I’m left swinging like a sack of potatoes on the end of a neon pink rope over the black cliffs of Porthcawl. Oh the shame.

This sleepy Welsh village, with its serene coastline, beautifully kept Kenfig National Nature Reserve and friendly, relaxed locals doesn’t immediately strike you as an extreme sports destination. But since taking the train to nearby Bridgend from London the day before, I’ve already had a go on a high ropes climbing course, quad bikes and a zip wire (as well as overhearing the howls of a stag party peppering each other with paintball bullets) at Adventure Wales Activity Centre. 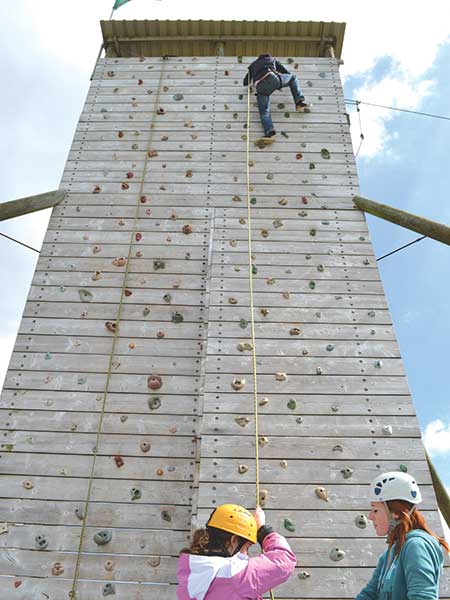 However, it’s the rock climbing I’m here for. Porthcawl is great for beginners as there are a couple of man-made climbing walls at the activity centre, and just 10 minutes’ drive away there are dramatic, craggy black cliffs, with the cold waves of the Bristol Channel slapping against the rocks below. That’s where we’re heading.

It’s a beautiful day, and we arrive at the climbing spot  with a couple of hours until the tide comes in. My instructor Dan is a serious climber, and arrives laden down with a reassuring amount of gear – ropes, harnesses and heaps of nuts and hexes, metal chunks which are wedged between rocks to secure the ropes.

As he sets up, securing three loops to take my weight if I fall (or when, as it turned out, countless times) he chats about his own rock climbing experiences. One of these includes having to sleep in a bivi bag on a tiny ledge in Switzerland’s mountains … harnessed up to the rock face. Gulp.

Dan’s a real climbing fanatic, working round the clock for half the year so he can go off on mad, bad and dangerous rock climbing jaunts the rest of the time. “For me rock climbing is a lifestyle, not a hobby,” he says. 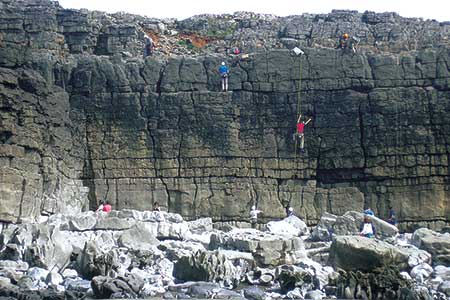 Hanging out: the steep cliffs

His experience shows as he runs me through the mechanics of how the ropes will take my weight and introduces me to the routes I’m going to take up the rockface – they’re named, inexplicably, Pluto and Popeye.

But first it’s the fun bit, abseiling down to the bottom. After a few nervy seconds on the cliff edge during which I doubt all the theory, knots and equipment Dan has just explained, I hold my breath and lean back, the ropes tauten and everything holds fast. Leaking the rope gently through my hands as I’ve been taught, I gently bounce to the ground – and don’t plummet onto the wet rocks below. An excellent start, even if I do say so myself.

Time to climb back up again. I scramble, drama-free, up two of the easier routes before getting tempted by one a grade up. It has numerous tricky features, including a jutting corner I’ll have to climb round. Inspired by Dan’s daredevil tales, though, I decide to give it a go. 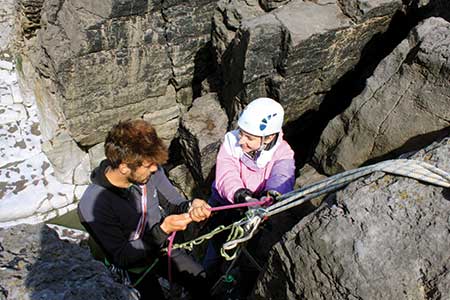 It’s unbelievably tough, and my fingers start to feel cold and raw as I inch my way up. I get to that corner, and that’s when the panic sets in. I fall, swing back onto the rocks, fall again, get back on the rocks and tumble off again. I’m about to concede defeat and ask Dan to hoist me up, until a desperate lunge miraculously takes me over top.

At first I don’t know whether to weep with relief or punch the air, but as I turn around and see the sparkling sea all that way below I’m completely flooded with exhilaration. Next stop K2, maybe?

Getting there Take the train from London Paddington to Bridgend with First Great Western from £76 return. 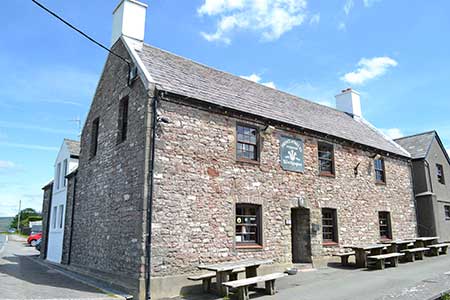 To get a warm welcome and colossal portions of pub grub, your best bet is the Prince of Wales, a 16th-century pub by the Kenfig Nature Reserve. Tuck into scampi, cod and chips, or beef and ale pie. Mains from £8.75.

The three dining areas at the Atlantic Hotel are a great place to while away a Sunday afternoon with a big lunch and a few drinks. There’s a wide selection of vegetarian dishes on the menu here, too. Mains from £9.75.

With views out to sea, The Waterfront on Porthcawl’s Esplanade is a scenic place to grab a sundowner. The crowd is upbeat at the weekends. Drinks from £3.50.

The Marine is a top spot for watching sport or playing pool over drinks. Pints £3.50.

The Atlantic has spacious rooms, lovely staff and serves huge breakfasts of Welsh fry-ups or kippers. Standard singles from £75pn, including breakfast.

Basic rooms with seaviews are available at the Seabank Hotel. From £40pn.

Welcome to the boomtowns of Western Australia