Girls who go by nicknames such as MurderUrs, Velvet Vandal and Rebel Rebel, and play for teams such as Voodoo Skull Krushers and Ultraviolent Femmes.

And it’s not just a game, it’s a lifestyle, as I find out when I join the London Rockin’ Rollers (LRR) for training.

Among the first I meet is Jackie Mason, aka Jack Attack, who’s been skating for five years and represents England and the Neanderdolls, one of LRR’s three inter-league teams.

“Derby is the biggest girl gang in the world,” she says.

I can see what she means – more than 30 women have turned up for this Wednesday night practice in Tottenham, and they look more like a motorcycle gang or punk band than a sports team, with their tattoos, piercings and heavy metal T-shirts. 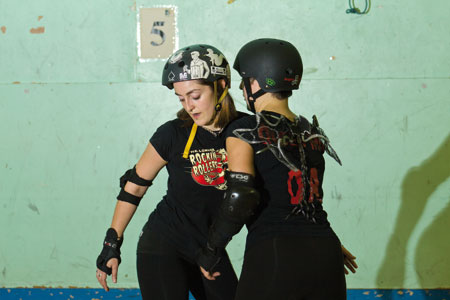 “Everyone is like a superhero with an alter ego,” says Jack Attack. “We have people from all backgrounds. They may be ‘Mum’ at home, but they’re known as ‘Murder’ here.”

Jack Attack is one of the founding members of LRR and a coach for the club.

“There’s a real punk attitude in the sport,” she says, explaining that although derby’s been around since the Thirties, it’s enjoying a revival, sparked in the early 2000s in Texas.

The sport has since become hugely popular worldwide, with more than 1200 amateur leagues. Jack Attack says about 160 Londoners play the fast-growing game and there are around 75 derby leagues in the UK.

It’s not just a sport for chicks, either. “Guys love watching derby because they’re initially attracted by the girls skating around in short skirts and hitting each other,” Jack Attack laughs. “Then they watch the game and get hooked. 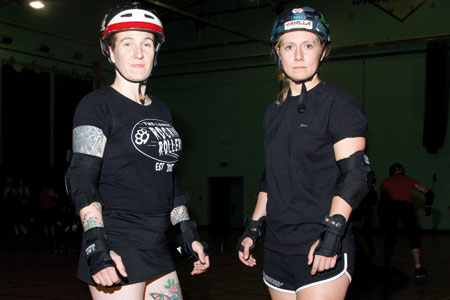 They realise that there’s more to the sport and they keep coming back.” The overall principle of the game is simple.

Each team of five has a designated point-scorer called a ‘jammer’, marked by stars on her helmet.

On a flat, running-track-shaped surface, the other four players on each team – blockers – use all their might and skill to help their jammer lap the opposition or stop the opposing jammer from getting by them.

All of this while on roller skates. Jack Attack summarises it best: “Skate fast, turn left, hit a bitch.”

I watch as girls skate faster than I can ride a bike pound the deck and bounce back up with smiles on their faces. I hesitantly get kitted up for a try. “What skates have you tried before?” asks Jo Bell, aka Von Bitch, another founding member.

“Er, Fisher Price?” I reply. They hand me a waiver, but luckily for me they’re not going to throw me to the lions – yet. 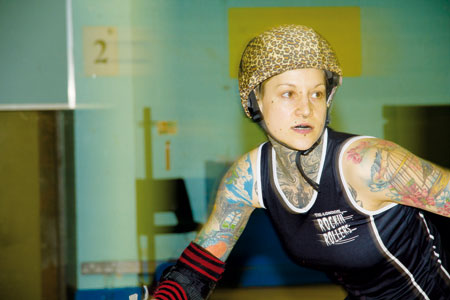 “Our league was started DIY-style,” Von Bitch says. She recalls having to learn the hard way in 2007, with players regularly breaking bones while getting to grips with the game.

“We had no idea what we were doing, we had to learn everything from YouTube,” she says. But Von Bitch is now an expert. She teaches me some basic moves.

LRR are all about controlled aggression, so newbies have to pass a ‘Fresh Meat’ course before they’re allowed to get involved in a scrimmage. During this three-month course beginners learn how skate, fall properly, how to barge (no punching, no elbowing, no kicking or attacking the face).

While Fresh Meat classes limit the risks involved, it’s still not a sport for the feeble. 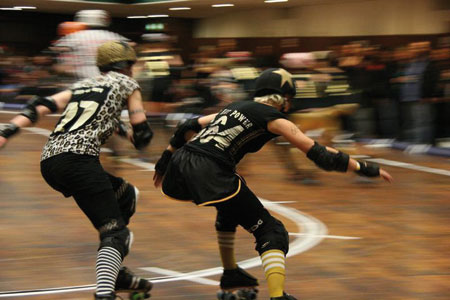 From my short skating session, it becomes apparent that roller derby is hugely inclusive – whatever your athletic ability, body shape, cultural background or gender (there are also men’s leagues and transsexuals are welcomed), you can play roller derby. Jack Attack explains large and small ladies are needed for different roles.

And it is an intense workout. “Everyone new tones up, loses weight and works everything from their legs to their coordination,” Jack Attack says.

“You become obsessed with it, and I’ve never had so many female friends. You become mentally tough, it makes you physically stronger, and when you sign up, you also adopt a big family.”

Fresh Meat tryouts cost £8 per session or £40 per month. The next match is on December 15.
londonrockinrollers.co.uk

Running of the Bulls, Pamplona