The new 37-storey building, which is officially called 20 Fenchurch Street, gets wider towards its top with an unusual concave design, which had given rise to its earlier ‘walkie talkie’ nickname.

Only this week is emerged that because of this novel shape, it has been reflecting the sun down into the street leading to incredibly high temperatures which melted part of a Jaguar that was parked in the street. A barber has said that the temperatures burned a hole in his doormat, too.

The temperatures on the ground even got hot enough to fry an egg (see video below). 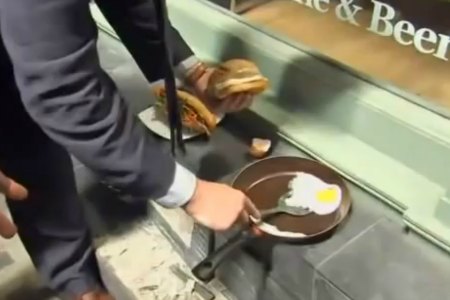 The new screens have been erected to protect local businesses from this sun-burn phenomenon. 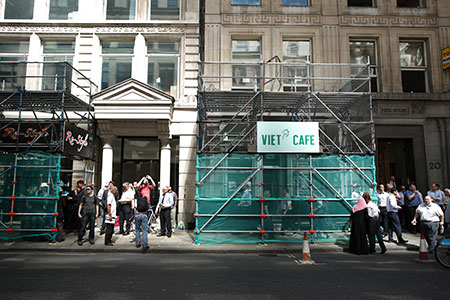 “We’ve got the instant fix which will make sure that it’s safe and prevent the heat from being anything like as intense,” said Duncan Bonfield, a spokesman for the building’s developers Land Securities.

It is thought that at particular times of day, the sun is reflected off the building and converges on a single point in the street below, which leads to the temperatures.

“At no stage did the 3D modelling suggest there was going to be an issue with light reflecting and focusing at ground level,” Bonfield added.

The screen is to protect local businesses for the next two to three weeks, after which is thought the position of the sun in the sky will mean that it is no longer a problem.