Sekope Kepu’s in at tighthead prop for Ben Alexander while the reshuffle at the back for Folau means Jesse Mogg goes to the bench and ‘Honey Badger’ Nick Cummins returns to the wing after an injury layoff.

Queensland Reds back rower Jake Schatz will also debut if he gets a run from the bench.

But there’s no bigger move from McKenzie than the reintroduction of Cooper to the number 10 jersey he hasn’t worn since the Wallabies beat South Africa and Argentina in September last year – they play Argentina next week.

Naturally, McKenzie is playing the story down, given any yarn involving Cooper – quitting rugby, calling the environment toxic, becoming a boxer – usually comes with its own drama.

“We have very specific thoughts about how we want to play this game and feel Quade is best suited to carrying that out,” said Wallabies coach Ewen McKenzie.

“He’s been part of our matchday squad in both games so far but his role now changes from being a finisher to starting the game. We feel that role will suit how we want to play.

“He is also an experienced and successful Test player, which is handy to have against a hardened Springboks outfit.

“McKenzie said his work on and off the field has earned him the shot.“He’s carried himself extremely well all year and during the last fortnight in the role we’ve asked him to complete. Now, he gets a chance to make an impact from the start of the game.” 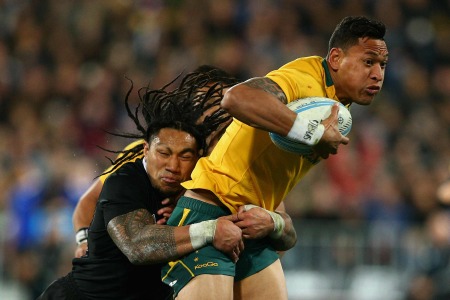 After Folau signed onto the rugby for two years saying he was enticed by the prospect of playing fullback, where he plays for the Waratahs, and the World Cup next year, he’s got a go in the position he wants.

“Israel has played more fullback than on the wing so he will undoubtedly feel comfortable playing the position. He has looked impressive at training and we think he will add value with how we want to approach the game,” McKenzie said.

”It’s a really full-on attack team, without talking them up too much, I truly believe it is one of the best back lines we have faced, not just this year,” Meyer said.

”They’re going to move the ball with Folau at fullback, they’ll attack our forwards on the blind [side]. With Cummins coming in, I’ve always rated him, he is a very strong runner.

Flushed Away in India