By far outclassed on paper, their 64th ranking dwarfed by Chile’s 14th, the Socceroos were at sea in the first 15 minutes and paid for it going 2-0 down before they knew it.

But through Tim Cahill, in the best way he and his nation know how, they shocked the fancied tournament underdogs with a cross into the box met by his inch-perfect header.

If Chile didn’t already realise, they were in a proper scrap.

No pundit fancies the Aussies, made up of players mostly young and inexperienced from far-flung leagues around the globe or the humble A-League, or coming to the end of their career. Even Prime Minister Tony Abbott, draped in a Socceroos scarf, had earlier wished captain Mile Jedinak luck by calling him “Mike”.

‘Room for improvement’ comments escalated quickly to ‘It’s going to be a very, very long night,’ but not for Ange Postecoglou’s plucky side.

With speed on their side and determination in spades, they made up for a lack of finesse with enthusiasm to break up Chile’s apparent fluent passing that gave England a 2-0 touch-up at Wembley in November last year. 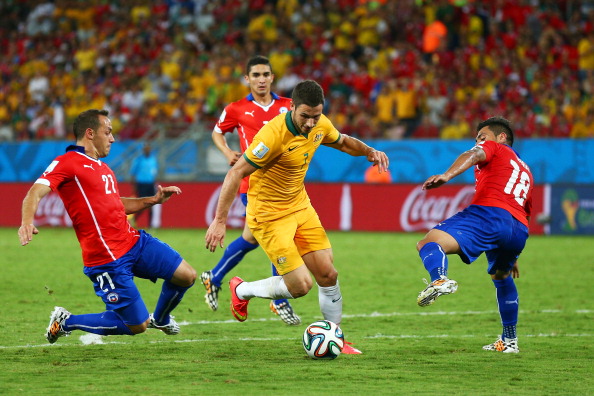 The shackles were broken early through a scrappy Chilean goal. Barcelona’s Alexis Sanchez broke into the box before the ball popped into the path of Charles Aranguiz, who was stood up by keeper Mat Ryan. His cross bobbled somehow for Sanchez who placed his finish in the back of the net despite Ryan’s strong left hand getting a good piece of it.

It was 2-0 moments later, this time the Aussies getting torn to shreds with Sanchez again causing the problems. He spun and got clear before finding No 10 Valdivia who finished with power and precision off the bottom of the crossbar.

Shocked and shocking, the Socceroos somehow pulled themselves together.

It looked as though Cahill had found an equaliser through another outstanding header on the end of a Matthew Leckie cross, but in getting goalside of his defender he was also offisde.

Soon after a sensational half-volley from Mark Bresciano’s left boot at the far post was brilliantly saved.

Eduardo Vargas had his chance to put Australia away when he chipped Ryan but Korea-based defender Alex Wilkinson cleared off the line. 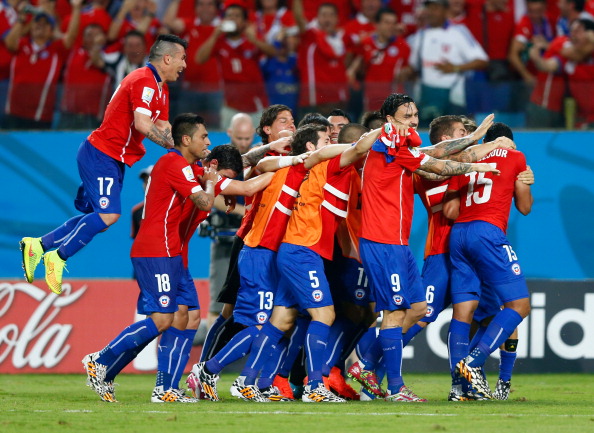 A series of sensational counter-attacks, especially through the ever-dangerous Leckie – strong as an ox against his size-impaired opponents – scared the bejesus out of Chile but with no result.

Another Cahill header, from an excellent Jason Davidson cross, cleared the crossbar narrowly.

A third goal came two minutes into extra-time through Jean Beausejour, after another great save from Ryan, and tired legs showed by the final whistle.

It appears plucky, gallant and gusty appear destined to be the trademarks of this World Cup for the “rebuilding” Socceroos, not that there’s anything wrong with that.

Just the two finalists from the tournament four years ago to go now then in group B – Spain, the Champions, who were humbled 5-1 and the Netherlands who gave them the flogging.

RWC: Austravel will take £100 off holidays