Soldiers Inc. is an online multiplayer military operations game that can be played on any handheld or computer device with internet connection. The game is set in a critical war zone within the fictional republic of Zandia. Before even playing, you will see that it is quite sensory stimulating and has a great soundtrack to go along with it. The game is relatively easy to manoeuvre with instruction and tutorial missions provided when first logging in. This aids in developing an understanding on the main tasks and overall functions for the grounds of the game. Once guided through the main components, the instructional character will leave the player to manoeuvre and get a feel for the game on their own. 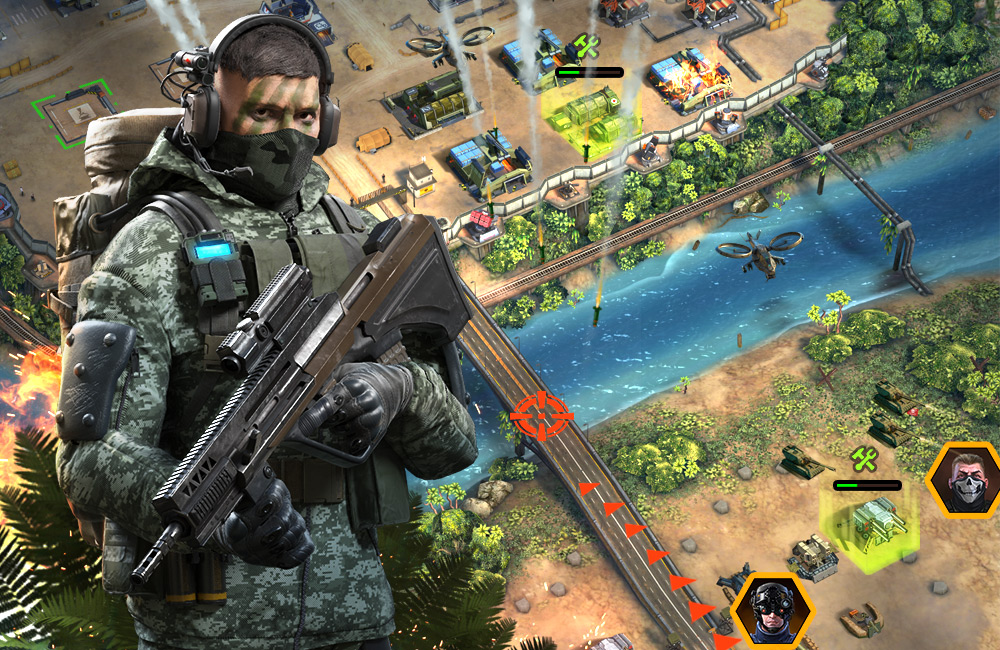 The player has the ability to pick their hero’s appearance, with a few options of female or male characters. Later into the game, the player can upgrade their own weaponry and gear for their character to wear. The player takes on the role of commander and will carry out tasks to develop their camp by building and upgrading bases, engaging in battles, as well as collecting resources. By upgrading assets within the base camp, the player will claim prizes to help develop their troops and bases and attack enemies. By attacking enemies, the player will then receive rewards which can be used as a sort of money to then upgrade necessary fundamentals within their camp.

By playing the game, new levels can be reached which then unlocks different compartments to the game. Once the player has a better feel for the game, they can join an alliance. By joining an alliance, the player is part of a team which allows them to give and receive support when needed. This is a great component to the game as it allows the players to interact with one another.

In a time when there are an abundance of video games being released every year, it is hard for game makers to have theirs stick out and get the attention it deserves. With over 500 thousand downloads, Mobile Warfare has already received high ratings and vast amount of positive user response. Users are appreciative of the large map to explore, the entertaining background music, the range of unique characters, as well as many other aspects! Although this mobile warfare game may show similarities to other strategy games, the makers have worked hard to create features that set it apart from other run of the mill games out there. The new modern theme to a fantasy war game has received a great amount of positive feedback from players around the world. It is easy to follow, involves fun and exciting new challenges, and has the ability to continuously be upgraded. The low maintenance qualities allow ease for new players to add as much commitment as they feel. As well, there are features to pay actual money to allow players more freedom within the game such as speeding up construction and healing processes. So, whether you are new to video gaming or an advanced player, Soldiers Inc. Mobile Warfare is a great download that might just get you hooked! Happy Gaming!

Are your moles healthy? How to know when you need mole removal