Spice Girls ‘to tour Australia in 2014’ … including Posh!

Kyle Sandilands’ 2DayFM breakfast co-host made the “exclusive” announcement on Wednesday in Oz.

“This is very much an exclusive announcement that I have heard about,” Jackie O said.

“All the Spice Girls will be touring Australia. No official announcement has been made, but I have a source, a very reliable source.”

Questioned by Sandilands on their Kyle and Jackie O show, she refused to say whether her ‘source’ was their mate Mel B.

“I cannot reveal my source, but a very very good source and yes they’ll be touring next year, here in Australia … including Posh,” she said.

No promoter or the performers themselves have commented on a tour, which if it happened would be international news.

However, they do owe Aussie fans a song or two after axing the Aussie leg of their world tour in 2008 due to “family and personal commitments”.

The Mirror reported last month that the group isn’t likely to tour due to a spat between Beckham and ‘Ginger Spice’ Geri Halliwell. 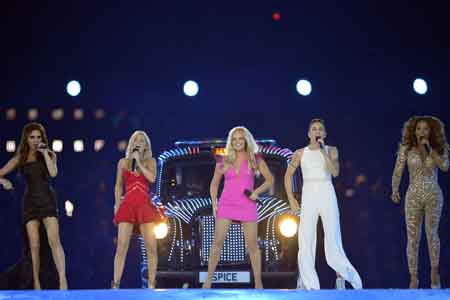 The five members of the superstar group – Beckham, Mel B, Mel C and Emma Bunton – reunited for an appearance at the closing ceremony of the London Olympics but Posh tweeted she was a pop star “just for the night”.

Manager Simon Fuller said he wouldn’t put on a tour without Posh.

A musical by Jennifer Saunders based on their music is currently playing on the West End.