Sport opinion: Moyes and Ferguson must unite to for success to continue

So, the man with the hardest job since Thabo Mbeki (the South African president who succeeded Nelson Mandela), the next Manchester United manager to replace Sir Alex Ferguson, has been revealed.

United fans, to their credit, have generally reacted positively to the installing of David Moyes, a manager with just one second division title in his career’s silverware case: not the type of track record that would satisfy any of the other big four and certainly not comparable to the record of Fergie when he arrived from Aberdeen, having broken the Old Firm’s grip on the Scottish title and won the UEFA Cup Winner’s Cup.

Moyes will be under no illusion as to the size of the boots he’s being asked to fill, and there’s a 14ft statue outdside Old Trafford ready at all times to remind him. Taking the helm at the most successful club in Europe over the past 24 years, the most valuable sports brand in the world, would be daunting for anyone.

Especially when that success has been built almost entirely by the club’s previous manager, Ferguson, who didn’t just seek to create great teams but develop an infrastructure at the club steeped in former players who know, understand and similarly expect his standards at all levels. United fans and shareholders can take some solace from Fergie’s appointment as a director at the club.

Moyes’s teams have always played well above their price tags on the pitch. He shares with Fergie that rarest of gifts: the ability to turn character into skill and build teams that are greater than the sum of their parts.

His biggest challenge may not be on the pitch, but fitting into a club which down to mortar is the previous manager’s vision. Moyes’s capacity to establish a working relationship with Ferguson, buying into the ethos he has created, but having the fortitude to take it forward, will be essential.

Either way, as a United supporter, with Moyes confirmed and Jose Mourinho all-but back at Chelsea, I can’t wait for next season and this one isn’t even over.

Agree or disagree? Is Moyes the right man for the job? letters@tntmagazine.com 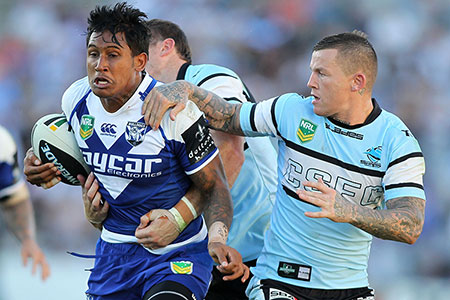 Todd Carney’s decision to turn his back on a cool AU$1m to remain a Cronulla player is the type of loyalty story that the sporting world loves.

But like most stories of gallant selflessness, if you look hard enough, there’s usually more to it. Carney, who has been dropped by both Canberra and Sydney for alcohol-related off-field ‘misdemeanours’, was given a chance at redemption by Cronulla – a club currently making headlines for all the wrong reasons after an investigation into doping was halted.

Carney turned down a big money deal to join Penrith apparently worth AU$1m more than the Sharks could afford. Carney chose to stick with his team. Noble, right?

Maybe. But the choice calls into question the integrity of the salary cap which works on the precept that clubs pay market value for their players. Does something else at Cronulla stink?

A unique Arctic adventure: the World of Greenland is a must-see