Student protests in London today turned violent when demonstrators smashed up a police van and hurled wooden poles, bottles and other missiles as they tried to break through police barriers around Whitehall.

Protesting against proposed cuts in higher education funding and increase in university tuition fees, students marched in cities around the UK, including London, Birmingham, Bristol, Glasgow, Cambridge and Manchester.

The student protests were mostly peaceful, although eight arrests were made in London, four in Manchester, four in Bristol and one in Brighton.

In London, protesters surrounded a police van in Whitehall, rocked it back and forth and smashed the windscreen with wooden poles.

Things nearly spiralled out of control when students lit a fire on the road leading to Downing Street and threw fire-bombs. Two police officers were injured while several arrests were made.

Effigies of the Liberal Democrat leader and Deputy Prime Minister Nick Clegg were burnt as students showed anger against his “U-turn” on his election promise to oppose the tuition fee increase.

However, plans to demonstrate outside the Lib Dem headquarters were quashed by police determined not to allow a repeat of what happened two weeks ago when students attacked the Conservative Party headquarters. 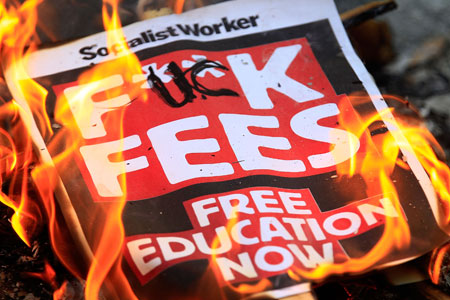 Leader of the National Union Students Aaron Porter said he was opposed to any violence.

“There are no conditions in which violence is acceptable. We saw a couple of weeks ago the anger that students had with regard to the government’s proposals and tomorrow is another opportunity for students to show what they think about those proposals. From my perspective I think it’s really important that the campaign continues its momentum and we continue to hold the government to account,” he said.

But some other student groups said everything was “fair in love and war”.