Surf’s up: Fiji is world-famous for its surf, and for good reason

However, there was always one problem. And it was a big one. Actually hitting the waves in Fiji wan’t easy, at least on a backpacker’s budget.

Practically the only way to really enjoy a boardriders holiday on the good surf was to stay at a pricey island resort, often costing more than $1,000 a week. No chance. But that was then and this is now.

As of July last year, the Fijian government passed a monumental law called the Regulation of Surfing Areas Decree, which meant the best surf spots could no longer be used exclusively by the fancy resorts. This new law is all about opening up Fiji to the surfing world and engaging the local population with surf tourism. Now, with this decree in effect, budget surfers such as myself can afford to get out in the blue room.

Indeed, as local surf legend Ian Muller, who founded the Fijian Surf Company, told me, “the local surf operators and local surfers have benefited the most from the decree, which was its main intention. “Surf tourism will only get bigger. It is positive and has given a lot of us here hope for the future.” I didn’t need any more encouragement… 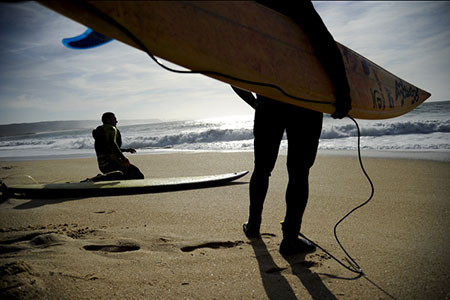 I have always wanted to surf Cloudbreak, ever since I was young and would watch countless surf videos of Kelly Slater getting barrels that seemed to last forever. Cloudbreak, a mile off Tavarua, an island off Viti Levu, is situated over a coral reef that breaks left over crystal blue waters. When ridden, you can see the channels of the reef below you, as if you were flying over liquid glass. It’s a fast, but super fun, wave that is best in offshore trade winds in south to south-west swells year round. Heavy barrels can be surfed in swell 4-6 feet high, but should only be surfed by intermediate to advanced surfers.

Up early and eager, I’m picked up by Ian’s company and we head to Denarau Island’s port, a 20-minute drive from central Nadi. From there, it’s a 30-minute boat ride to Cloudbreak and the
surrounding surf breaks. Joining me are keen fellow surfers from Australia, the UK and the US. Something about riding out to sea with your surfboard under your arm and the wind blowing in your face, seeing these picturesque islands pass you by, really makes you feel like, wow, I’ve actually made it. I am going to surf a world class wave. 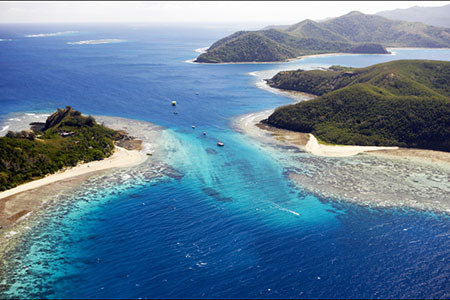 On the way we check out Namotu Island, which is next to Tavarua Island, but our captain suggests we’re better off heading straight to Cloudbreak, where the surf would be larger.

Not long after, we pull up alongside Cloudbreak itself. A few other surf tours are there as well, but there’s no more than a dozen other riders, all enjoying the fun-sized 5-foot surf. Now, I should say at this point that I’m 6’4”, meaning this size is still pretty small for me. But nonetheless, I couldn’t be happier with what is in front of me. After surfing an hour, the conditions start to reach epic proportions. The wind turns offshore, the tide starts to drop and the sun shines full beam.

Every few minutes a larger set comes through, giving me a ride that lasts about 15 seconds with four to five cutbacks all the way down the line. The wave is almost mechanical. Every time it breaks, it breaks the same way, barrel section to drop in, with a long wall to slash to pieces. I could do this all day! 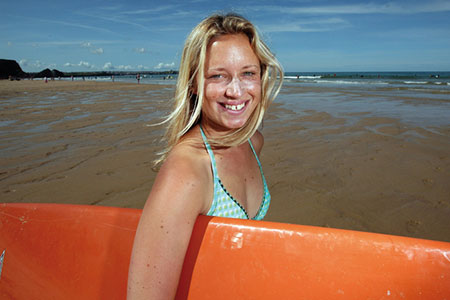 Cloudbreak is not for everyone. It’s more for the experienced surfers. However, that did not stop Stephanie from the UK. Stephanie had this strong determination to improve her surfing (and to show off to her ex-boyfriend). Sure, she’d done a few surf lessons in Byron Bay, but Byron’s surf beaches don’t even come close to what Cloudbreak is all about.

As soon as Stephanie paddled out from the boat into the break she managed to get sucked down to the dry reef patches where the waves were crashing onto. A nearby surfer quickly whistled down the boat to pick her up. Luckily, Stephanie did not get hurt. She panicked and over estimated the current of the ocean. Surfing with water on all sides and the closest patch of sand several kilometres away can definitely be overwhelming at first.

Five-and-a-half hours later, my arms started to give in and I felt a massive burn on my face and back, despite repeatedly putting sun block on. Waves keep rolling in and, after catching one, it’s hard to resist catching another, especially with the fun conditions at hand. It’s always ideal to end your last wave on a good ride that will fulfill that surfing sensation (for the time being) and mean I can sit back in awe and day dream when I am back at TNT Towers, while working of course, about my last wave that will hopefully hold me over to my next surfing adventure. 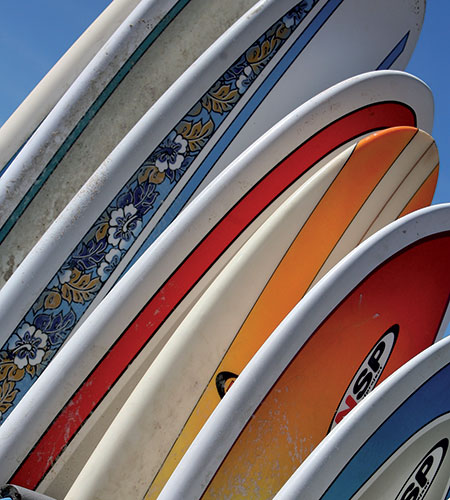 Fiji has a variety of waves on offer that cater to all surfing levels so that no one misses out.
“It’s game on and any and all should come to Fiji and get a piece,” says Adam Yared, founder of Malolo Surf Company. With the passing of the Fijian surf decree, surfers can now have access to all the breaks throughout Fiji.

The surf in Fiji is split up into the areas of Malolo, Coral Coast, Southern Lau and Kadavu, plus the Northern Lau and Great Sea Reef. Peak season for surfing is in the dry season months from May to October, with typical Southern Hemisphere swells. However, great waves can be surfed all year round.

Here are some particularly good surf breaks that you might not have heard of:

Frigate’s Passage: located on the Coral Coast, Frigate’s hugs the south-western corner of Viti Levu’s coastline. It’s a fun wave for mal riders (long boarders) and shortboarders In 2-4 feet, and really turns on in 4-6 feet with heavy barrels that are equal in power and speed to Cloudbreak over 6 feet.

Sigatoka Rivermouth: south of Nadi, this is the only beach break in the Fijian island chain. Sigatoka is a fun left and right beach break that, with the right sand bank, can create an epic lefthander. It’s a great beach break for learners up to advanced surfers.

Daku: in the southern Lau area, this is a fun and playful wave and is best in east and north winds and any south and east swells. The wave has many sections and can barrel on a good day.

To find out more about all of what Fiji’s surf has to offer, walk into a local surf shop or check out one of the several informative print and online surf guides available. Better yet, just go to Fiji!

Round the world in global gourmet cuisine