The best circus and cabaret events in London

Kiss With A Fist

Mixing burlesque with wrestling, foxy boxing and chili eating, and why not? This weekly show has former wrestler Big Heart compere an evening of no-holds-barred grappling. Rounds include angle grinding and fire breathing, as well as bikini-clad wrestling (of course) and an audience-involving third round! You’ve been challenged.

Tumble Circus: This is what we do for a living

Slapstick comedy, trapezes and slack- rope walking – not to mention the odd flying hoola hoop, too. This show eschews the glitz, glamour and razzmatazz of theatrical performance in favour of back-to-basics, how-do-they- do-that stunts born from their own life experiences. How they found out they could do some of this stuff, we’ll never know.

Acrobatic, bone-crunching, muscle-rupturing feats of endurance, skill and, above all, talent and courage are on offer here. Hip hop beats, Chinese poles, breakdancing, and a stage littered with garage debris sets the scene for a wild ride of theatrical trampoline and aerial work from the Finnish Petit Mal. It’ll be sure to make your jaw hit the floor in disbelief.

There’s an earlier evening show, Al Burlesco, for you to dip your toe in the burlesque waters. We recommend, though, you take a running jump straight in for the later, Banbury Cross-hosted Carnie Ville, which features dinner and all manner of dance, daring and taboo-busting performance (left).

Gorilla Circus – The Primal Side of Circus

The only circus school in London that takes place outside (below left), with, obviously, the only outdoor trapeze school open to the public, too. Since 2009, it’s had hundreds of Joe Bloggses pass through the doors to test their skill and bravery, some interested in a curiosity-sating one-off, others opting to return to expand and finetune their acrobatic technique. If you fancy moving on from being a mere spectator to something a little more adventurous the next time the circus rolls in to town, strap on a harness and become a big-top star of the future. Vertigo sufferers had better sit this one out.

With highlights from the Circus Burlesque and award-winning Shipwrecked shows, this monthly bash presents the very best in burlesque. Expect your mind to be blown and your eyeballs to fizz as Miss Tempest Rose (below) leads you through a variety of acts that span one end of the burlseque spectrum to the other and dazzle and dare for your delectation. 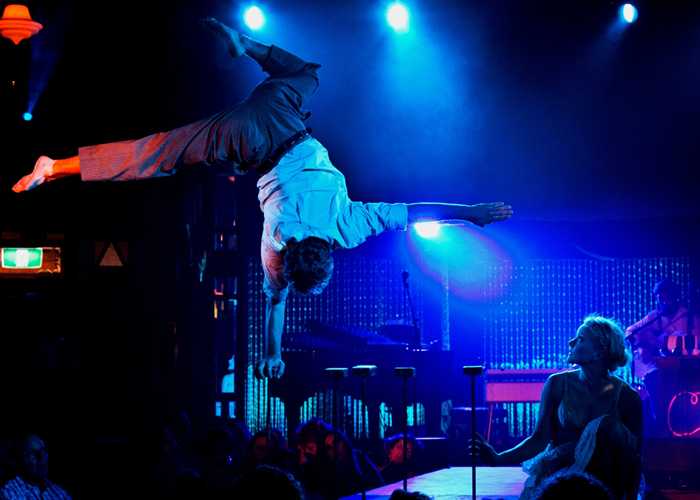 Originally directed by Cirque du Ciel’s Guy Caron, this Chinese two-hour extravaganza features dance, acrobatics, martial arts and other Eastern-influenced performances, including the monkey poles, in a show that defies what you thought possible. It has a twee storyline, too, to tie it all together. Edu-tainment indeed.

Brazilian theatre company Companhia Bufomecanica brings this new and decidedly alternative twist on the Bard’s plays (below) as part of the World Shakespeare Festival. Prepare for multi- media, aerial choreography and more than a twist of circus-styled acrobatic performance. Remember what Shakespeare was like to learn at school, all the ‘who art doth this’? Well this is nothing like that dross. Richard Branagh, eat your bloody heart out, mate!

The dedicated can do an honours degree in circus arts here, but for those seeking more of a taste of what it’s like working in the big top, there are taster days, too. You can sample tightrope walking, the flying trapeze and acrobatic balancing, as well as juggling (up to you if you decide to use chainsaws or not!), knife throwing (bring a friend!) and lassooing.

An exhilarating mix of classic and contemporary circus performance, this two-hour show features artists from throughout the world. There’s the clowning Andrea and Emil from France, and the dancers, acrobats and human-pyramid builders of The Kenyan Boys of African Hip-Hop. Best of all, though, is The Globe of Death, a show-stopping, climactic motorcycle performance.

The Tassel Club is London’s longest running vintage cabaret troupe, and it has a brand- spanking new show, full of circus, vaudeville and cabaret performance for this year’s Underbelly fest.

Featuring tightrope walkers, gravity-taunting flying bicyclists and trapeze artists among its repertoire of death-defying, audience-stunning performers.This is sure to wow.

”It’s not the winning, it’s the taking part that counts,” apparently, so said some loser. In a summer where everything is all about competition, with the Olympics’ wiry-framed athletes (well, long distance runners anyway) dominating our attention as they run, throw and splash around, this clowning, cabaret-styled show tells the Games story in its own way. Cue: song and dance, epic feats of athleticism and gaudy tableaux, as clowns The Zeit Geists take you through a side of the event you’ve not seen yet. Perhaps this is what Lord Seb Coe had in mind when he was banging on about the ‘greatest show on earth’.

The Royal Family of Strange People

Very strange people indeed, the kind that make trapeze-artists look like timid Conservative- voting middle Englanders devoid of any sense of scale or ambition. Marshalled by The Space Cowboy (below), who has 11 Guinness records to his name, this group pushes the boundaries with its stunts and extraordinary feats of endurance. Knife-throwing, mutilation, levitation – you know, that sort of usual, everyday stuff.

This all-male team of oddballs and eclectics mixes satirical political observations with garish performance that veers from burlesque and circus to good old-fashioned daft clowning around. It’ll be brash, colourful, feature a whole lot of male flesh and make you laugh, smile and wince – probably all at the same time.