The Bluffer’s Guide to The Great Gatsby

If you still haven’t managed to read the book, watch either of the previous films, or catch the acclaimed TV series, then allow us to fill in the gaps.

WHO WROTE THE NOVEL?

F Scott Fitzgerald (1896-1940). The ‘F’ stands for Francis. In literary circles, the American writer is famed for writing quasi-autobiographical short stories about the beautiful and the damned (not so coincidentally, this was also the title of one of his novels). A committed alcoholic, Fitzgerald died of a heart attack at 44 – thus cementing his reputation as one of the great unfulfilled literary talents of his generation. Or, alternatively, perhaps the most frequently filled. 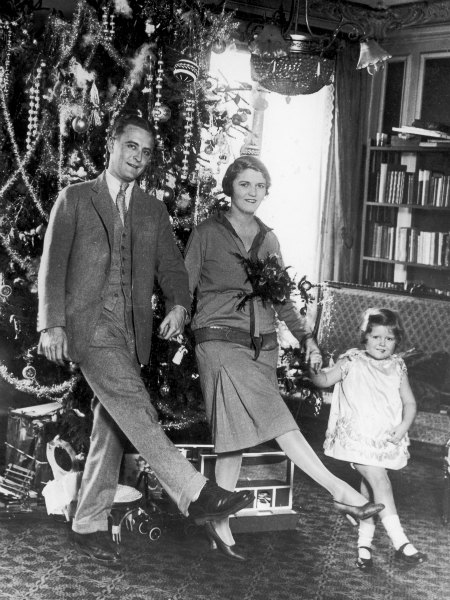 The impossibly enigmatic and strangely elusive Jay Gatsby (legal name James Gatz) is a squillionaire of dubious but unquestioned origins who hosts infamous parties. It later transpires that he holds these fabulous events in the hopes that his not-so-accidental neighbour and past flame, Daisy Buchanan, will grace his halls/patio/pool. We’re introduced to Gatsby’s particular and peculiar world of giddy glamour through a newbie to the neighbourhood, Nick Carraway (much less well off, bit of an arty loner – so pretty much perfect fodder as the story’s narrator). Gatsby takes his neighbour under his wing, but although initially dazzled by this glitzy lifestyle, Nick soon starts to unpick the sequins. (You can be forgiven for thinking that this sounds uncannily like the plot of The OC, but remember that Fitzgerald got there first, by about 75 years.)

1. “It makes me sad because I’ve never seen such – such beautiful shirts before.” Daisy on those shirts.

2. “I like large parties. They’re so intimate. At small parties there isn’t any privacy.” Jordan (Daisy’s friend) on parties.

3. “There are only the pursued, the pursuing, the busy and the tired.” Nick on everybody.

4. “There is no confusion like the confusion of a simple mind…” Nick on Tom (Daisy’s husband).

5. “It’s a great advantage not to drink among hard drinking people.” Nick on Daisy.

DIDN’T THEY ALREADY MAKE A FILM?

Yes, two in fact. After the relatively low budget 1949 black-and-white version, British ‘New Wave’ filmmaker Jack Clayton of Room at the Top fame directed and Francis Ford Coppola wrote the script of the 1974 bigger budget remake. Everybody and everything is beautiful. Just picture Robert Redford (Gatsby) and Mia Farrow (Daisy) frolicking around in 1920s tennis whites and achingly cool and sleek autos. Mention the famous scene in which Redford-as-Gatsby flings his impressive collection of perfectly folded pastel shirts around, whilst an astonished Farrow-as-Daisy looks on in tears. But for real bluffing kudos, note how the dark underside of all this vulgar wealth haunts the film. It lingers in the stagnant heat of the Long Island Summer, and creeps in through the watchful eyes of Dr T J Eckleburg, an optometrist from Queens whose roadside billboard keeps cropping into shot. The all-seeing bespectacled eyes are described (in the book) as being: ‘blue and gigantic — their retinas are one-yard high.’

WHY THE LATEST REMAKE?

Robert Redford and Mia Farrow might be hard acts to follow but this latest adaptation has a few famous names of its own, including Aussie director Baz Luhrmann (of epic Romeo + Juliet adaptation fame), Leonardo DiCaprio (of every possible kind of fame including the starring role in Romeo + Juliet), and Jay-Z and Beyoncé (of Jay-Z, Beyoncé and baby fame). It’s the last two musical titans you want to name drop though, as the soundtrack is set to overshadow the acting. Any film where you can afford to leave Carey Mulligan, Toby Maguire and Isla Fisher off the top billing has got to be good, right? Oh, and did we mention that a certain Miss Miuccia Prada has been roped in to design the costumes. But whether you think throwing celebrity glitter all over everything is a shortcut to success or failure, expect Luhrmann’s latest to be big, bold, and very, very loud.

Talk about the 2000 TV adaptation starring Toby Stephens in the title role and Mira Sorvino as Daisy, and point out that many Fitzgerald purists claim that this is the best screen adaptation to date, not least because Nick (played by Romeo + Juliet actor Paul Rudd) is much more of a narrator thus preserving the author’s masterly phraseology. Oh, and you might point out that Toby Stephens is the son of Dame Maggie Smith and Mira Sorvino is the daughter of Romeo + Juliet actor Paul Sorvino. This might seem like a pattern emerging, but it isn’t really.

DON’T SAY  ‘Apparently the film’s release was delayed until now because of its dismal Oscar chances.’
DO ASK  ‘But will Lurhman’s remake be ever so slightly derivative of a certain Romeo + Juliet?’

Republished with the kind permission of bluffers.com

Treatment of the week – acupuncture facial

The Grill On The Market review: Steakhouse restaurant in Farringdon, London