Developed with comic book legend Stan Lee, The Governator looks to be a franchise that is aiming to reap some serious coin.

Word is that along with the animated series a comic book and even a 3D movie will be released.

The premise of the cartoon revolves around The Governator being a fictional version of Schwarzenegger, who’s a retired governor of California by day and a crimefighter by night.

Apparently it will mix the real life of the actor-turned-politician with the superhuman exploits of the characters Arnie has played in films.

Online forums have been buzzing with the news. But it seems The Governator, like Schwarzenegger’s time in office, has drawn contrasting viewpoints.

Youtube user Oranqi wrote: “This is﻿ so fucking stupid i laughed :D”

Jmedi25 was not a definitely not a fan.

“Somebody pinch me, slap me, shoot me, stab me, blind me, anything that will make me forget this crap. This just might be﻿ worse than his actual years in office,” he posted on YouTube.

Katdrama was also cynical about the cartoon and questioned if it was genuine.

“Is this supposed to be a legit﻿ TV show? And if so…why does Arnold have a bunch of kids in his basement?!?!

PickPikmin also couldn’t decide whether they liked it or not.

“Simultaneously the greatest and stupidest﻿ thing ever,” the YouTuber wrote. 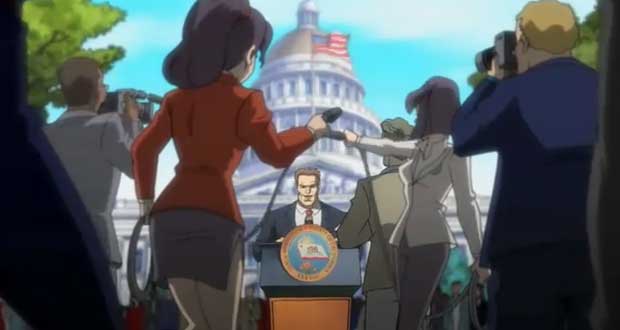 There have also been concerns about the ability of Schwarzenegger and the show’s creators –  branded entertainment firm A Squared Entertainment, comic books publisher Archie Comics and POW! Entertainment- to insert political propoganda into the series, effectively brainwashing children.

However, the former Californian governor said it was all about safe, wholesome entertainment.

“You will see more action in this series than you have ever seen before, but combined with comedy,” Schwarzenegger said.

“This will not be a violent show. If you look at my movies, a lot of heads come off! That is not what this is.”

The Governator will begin with a 52-episode animated series and will feature the voice and image of Schwarzenegger in late 2012.

The star also promised he would return to the big screen in non-animated form.

“I will also be in front of the camera, and I’m looking at many different scripts,” he said.

“We have somewhat held off with that because we really wanted to pay full attention to The Governator.“

DECIDE FOR YOURSELF? WATCH THE TRAILER FOR THE GOVERNATOR BELOW.

Which way to go?