Another month, another lump of cash winds its way from your bank account into that of a smug landlord, who’s no doubt gleefully rubbing his hands together that you’re paying off his mortgage for him.

On average, the price of renting a property has soared five per cent year-on-year in London, which means there’s increasingly less cash to have fun with while you’re living in the capital.

While it varies wildly borough to borough, it’s doubtful you’d get change from £300 a week in Shepherd’s Bush – while areas such as South Kensington are pretty much out of the question at £700 a week.

And, although it may feel the only alternative is to break into a property, set up home and demand squatters’ rights, there are other options.

As the mood of austerity further grips the country, more companies are springing up, offering temporary lets – these include empty homes, disused office spaces as well as commercial buildings.

Guardians of London is one such company. It provides an anti-squatter service for clients with empty flats and houses in prime locations in the capital.

Licence fees (rent) can be as cheap as £60 a week – inclusive of bills – and, although you’ll need to be ready to move out with just two weeks’ notice, some properties are let for three years.

You’ll need to fill out a basic application form, but after that, it could be just 24 hours before a property comes up for viewing.

Karine LauDort-Idonije, 33, heard about the scheme when she and her partner were given unexpected notice to leave their property. It was a godsend.

“Financially, with the current market, where we want to live and the space we’d get for the money, it wasn’t an option,” she says. “Having lived in west Kensington, the rents have gone crazy.

“We realised if we wanted to save money to buy, we couldn’t carry on throwing cash away at someone else’s mortgage.”

LauDort-Idonije, who works in PR, is staying in a four-bedroom property that boasts living and dining rooms and lots of storage.

And it’s costing her just £650 a month, including bills.

“That amount of money wouldn’t even pay for a studio around here,” she says. “It’s a wealthy woman who owns the property. She wants to refurbish it, but is waiting for planning permission. That could take a while.”

To register with the company, you’ll need to be employed or a mature student, and the admin fee is £75. And if you’ve got
a non-EU passport, they’ll need to check your visa and paperwork.

Gavin Handman, 37, who set up the company last year, says: “It’s not for everyone, being a property guardian, especially if you’re someone that likes quite a few creature comforts. If you’re happy to make do, then it’s a suitable way to live.” 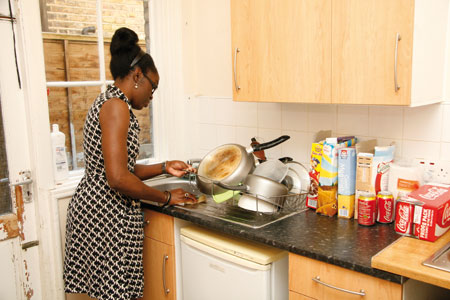 Ad Hoc, adhoc.eu
Licence fees range from £225-£310 per month with this company, which finds guardians to live full-time in empty flats, houses, offices, schools, pubs, care homes and other buildings. You’ll go through checks – Ad Hoc requires character and employer references – and will need to be flexible; the average stay is about eight months, but you’ll need to be prepared to leave a building with just two weeks’ notice.

Camelot Property Management, camelotproperty.com
When we check out their website, there are six places available at a former care home in Morden, south London, and four places in a four-bedroom house in Crystal Palace, south-east London. The company manages empty buildings on behalf of owners. These properties could be awaiting demolition, renovation, sale, letting or redevelopment. Fees vary from £25 to £100 per week, and you’ll need about £500 for a deposit.

Property Guardians, propertyguardians.org
This company prioritises offering affordable living to key workers such as teachers, nurses and charity staff. The majority of guardians are “single, educated and creative” and can find themselves living in everything from warehouses and offices, to hospitals and schools. “With recent strengthening of anti-squatting laws, there is increased possibility for a middle way, which provides protection from vandalism and arson, and very cheap (sometimes free) accommodation for someone who’s happy to work looking after a place that’s less desirable,” a spokesman says.

Oz Trip: If you’re happy and you snow it