The most memorable concerts and encores of all time

In 2015 alone, 9.5m of the UK population spent £3.1 billion on tickets to see their idols. Glastonbury sold out their 135,000 tickets in a staggering, and record breaking, 25 minutes whilst The Rolling Stones took the 2015 crown for most expensive concert ticket for their Zip Code Tour. In 2016 that ‘honour’ has been swiftly passed to Adele for her live tour where an asking price of £24k, through secondary ticket selling sites, was offered to see her perform at the O2.

But, the high costs of tickets don’t bode well if your bus or train leaves before the last chord has been struck. A recent study by Premier Inn into the nation’s gig-going habits has revealed almost one in three people (30.1%) feel they have missed a piece of ‘musical history’ by leaving gigs early.

So the question must be asked, what do you do if the encore’s running on? Would you stay or would you go? To get you thinking, we’ve pulled together some of the longest and most memorable concerts and encores of all time.

The Cure, Foro Sol, Mexico City
For Robert Smith’s 54th birthday, he delivered a 50 song set on 23rd April 2009. Not even the 5.9 magnitude earthquake that occurred during the concert was enough to shake Robert, his audience or, indeed, the Foro Sol Stadium! According to reports, the set consisted of 25 songs with a total of four encores covering off a further 25 songs lasting 4 hours and sixteen minutes.

Bruce Springsteen, Olympiastadion, Helsinki
At 4 hours and six minutes Bruce Springsteen broke records with his mammoth concert at the Olympiastadion in Helsinki on 31st July 2012. Maybe it was the summer heat or an audience who just didn’t want to go home but they were certainly ‘Dancing in the Dark’ by the time The Boss struck played the last note.

Chilly Gonzales, Ciné 13 Théâtre, Paris
Winning the title for the longest running solo concert is Mr Chilly Gonzales. He played for a staggering 27 hours, three minutes and 44 seconds between the 16 and 18 May 2009. Performing 300 songs, and interspersing these with anecdotes, his Parisian audience were happy to be entertained and sat back and listened for more than a day.

Muse, Olympiastadion, Helsinki
The Olympiastadion in Helsinki was were Muse, on 27th July 2013, performed their longest running show ever. Not taking any notice of its tour title – The Unsustainable Tour, the band perfectly sustained their presence on stage to play 27 songs as well as two encores much to the delight of their audience. 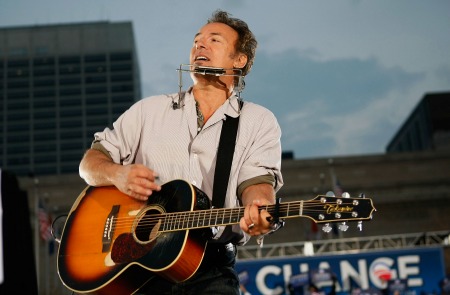 Live Aid, London
Probably the most iconic concert of all time and in aid of starving children in Africa, Live Aid boasted 75 acts playing for 16 hours linked by satellites between Wembley stadium and John F Kennedy Stadium, Pennsylvania. The two simultaneous concerts, on 13th July 1985, were attended by 172,000 people. Phil Collins flew, by Concorde, between London and LA to play live in both continents, Freddie Mercury brought the house down and, Bob Geldof, one half of the organisational team (the other was Midge Ure), had to hitch-hike home following the event as there were no taxis available.

Bruce Springsteen with Paul McCartney, Hyde Park
Again in 2012, this time in Hyde Park Bruce Springsteen sought the services of mega star Paul McCartney to join him. The concert became arguably the most memorable in the park’s history as Bruce upset some of the privileged few who own properties around the park. Westminster Council received a call and the order went out to pull the plug on the dynamic duo. Steven Van Zandt, a member of the East Street Band, later ranted on Twitter that “English cops” were responsible for stopping “80,000 people having a good time”.

Pixies, La Cúpula, Santiago
Their first ever show headlining in Chile, the Pixies played 33 songs as a tribute to the 33 previously trapped miners in Chile at their Santiago concert on 13th October 2010.  The miners, who had been trapped underground for two months, were dramatically rescued whilst the world looked on. “We were so moved by this story”, said frontman Black Francis, “we played a special set, 33 songs for the 33 miners, the longest set we’ve ever played as a band. We found out five minutes before we went on stage that all of the miners had safely reached the surface. This was definitely one of the most meaningful shows we’ve ever played.”

Grateful Dead, Winterland Ballroom, San Francisco
Making a good New Year great, the Grateful Dead played a humdinger of a show on the 31st Dec 1978 and rolled it well into the wee small hours of 1979. It is said that the set lasted six hours and included some 36 songs. The Winterland Ballroom had become somewhat of a home to the band over the years and, some years later; this concert was released as a live album called The Closing of Winterland. This was in homage to the venue which was shut down shortly after the ‘Dead’s’ New Year gig – being the last one to play inside its walls.

Ursula Martinez: My Stories, Your Emails