The naked truth: bullfighting is cruel, by Elen Rivas

The bullfighting season has just ended in Barcelona, and for Catalonia, which has banned bullfighting from January 1, 2012, it will be the last.

Here, Barcelona-born celebrity and PETA campaigner Elen Rivas writes an exclusive editorial to mark the occasion and talk about her campaign to urge Brits never to visit bullfights.

Spain is a country rich in history, architecture and art. It has also grown into a European urban centre abounding in industry, education and technology. I am proud of my Spanish heritage, but the fact that some people are still clinging to the tradition of stabbing bulls to death in bullfighting arenas is something that the vast majority of Spaniards, including me, are ashamed of. That’s why I recently posed for an ad for my friends at People for the Ethical Treatment of Animals (PETA) to urge travellers to my country not to attend bullfights.

Most Spaniards have made their revulsion for bullfighting loud and clear. As a result of their protests, the barbaric “sport” has been outlawed in Catalonia, and in a few weeks, no more bulls will suffer and die in Catalonian bullfighting rings.

My PETA ad was graphic – I was nude and “bleeding” from knives (banderillas) sticking out of my back – but nowhere near as graphic as the bloody, violent reality of bullfights, where the bulls have no chance of coming out alive.

Before entering the ring, bulls are beaten and have their horns shaved down to throw them off balance. They are kept in dark holding pens so that their vision will be impaired when they come out into the sun. Men on horses run circles around them while repeatedly piercing them with banderillas until they are dizzy, weakened from blood loss and suffering agonising pain. 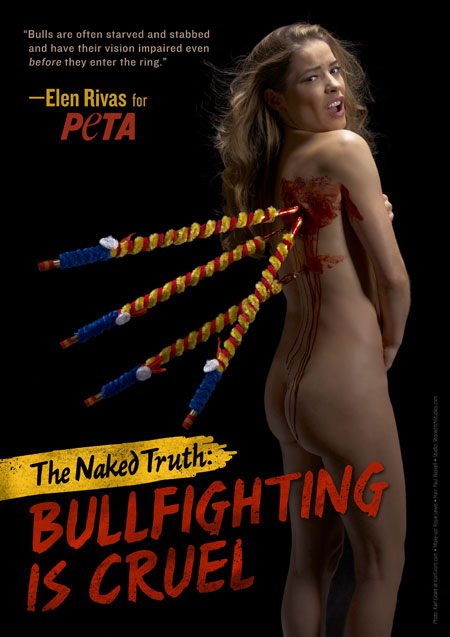 The horses, who are blindfolded, can also suffer serious injuries when they are unable to avoid a charging bull. The bulls are often still conscious as their ears and tail are cut off as “trophies” and they are dragged from the ring with chains.

Millions of Spanish citizens have signed petitions to ban bullfighting across the country, and cities throughout Spain have outlawed this morally indefensible pastime. Even our state-run Spanish television discontinued live coverage of bullfighting, saying it is too violent for children to see.

I am determined to raise my two daughters to be compassionate and kind. I refuse to allow them to believe that killing animals for entertainment is acceptable. Violence breeds more violence, as was evidenced by the recent riots in London. Imagine what a difference we could all make simply by being kind instead of cruel.

British, Canadian, Australian and American tourists have been led to believe that bullfights are something they should include on their travel itineraries. Most rush to the exits appalled and horrified by what they see, but by then, it’s too late. The money spent to buy a ticket helps to prop up this dying industry. I am appealing to anyone who plans to visit Spain: please spare a thought for the bulls. Don’t attend a bullfight.

I am thrilled that the end of this sadistic spectacle is mere weeks away for Catalonia. It is time for the rest of my homeland to put an end to the carnage as well.

Elen Rivas is a model and mother. She recently completed her first London Marathon.

Beckham back with Galaxy buts admits to enjoying the speculation