The pirates are coming! BYO shotgun at Es Firo, Mallorca

In March, at Valencia’s Las Fallas, it was the likelihood of having your eardrums popped like bubblegum by your close proximity to any one of a million fireworks. At the Mallorcan festival of Es Firo it’s probably going to be because there is a man dressed as a pirate and he appears to have bought his own shotgun to the festival.

And that is only the beginning of the craziness.

Cosseted in the palm of the UNESCO-listed Serra de Tramuntana mountains, on the Spanish island of Mallorca’s northern coast, is the historic town of Sóller (pronounced soy-air). The town itself is charming; its narrow streets studded with cute boutiques and artist shops. The obligatory tourist restaurants are confined to the main square, which itself is dominated by their church and town hall.

The people of Sóller are a proud bunch and every year they honour the most famous episode in the town’s history: the 1561 invasion by Algerian pirates. But what sets this town apart is that they aren’t satisfied with half-hearted ceremony. Not when you could instead stage a full-scale re-creation of the battle, complete with explosives, swordfights, plundering and hangings. And, of course, the very curious Bring-Your-Own shotgun policy.

For kids, there is Christmas; a day that seems designed for the pure indulgence of your fantasies. For the men of Sóller, there is Es Firo.

There is nothing to compare to the giddy satisfaction on a grown man’s face when you tell him he can dress like a pirate and you hand him hundreds of shotgun shells.

The men of the town are split into two groups, the Moorish pirates, led by the Pirate King, and the Catholic inhabitants of Sóller, marshalled by their tall, imposing Captain Joan Angelats, a local with a disarming smile and a gusto for his role. Over the course of the day the scene shifts between Sóller’s town square, the sea port 3km away and then back to the main plaza for the final explosive defeat of the invaders.

Through the smoke, witness the hooting, cursing, blacked-out faces of the barbarian pirates as they cause whatever mischief they can among the crowd, smearing black grease paint on the unwitting, and firing their weapons over the heads of the unwary. 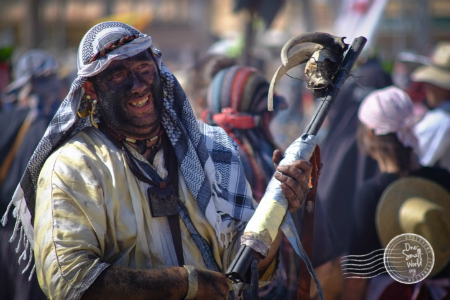 By far the pirates’ favourite pastime was stealing people’s hats, mounting them on the end of their shotguns and then blowing the hat to ribbons. Or, if the owner was lucky, having the hat returned to them with a new flip-top lid.

The day’s events climax in Sóller’s main square with a flood of pirates streaming into the plaza, wild eyed and frenzied. One pirate fearlessly scrambles up the outside of Sóller’s bank, a rope in his mouth but none protecting him from his death. When he makes the balcony the rope is secured so that others can shimmy up. Showering the crowd with the chocolate-coin spoils they find in the bank, they hoot and scream their victory over Sóller.

Other Moorish invaders have brought a lashed-together ladder and climb onto house balconies, threatening women and throwing stuffed effigies of their men to the mercies of the crowd below. Two men hang at the end of nooses from trees in the square, theatrical in their death throes. The air is thick with acrid gun-smoke and the caterwauling cacophony of shotguns. It is an incredible, surreal experience and you are smack bang in the middle of it!

But is that the sound of drums coming from beyond the square? The returning Sóller men! Cheers go up from the crowd as the local militia return to find their town sacked, their women captured and their fellows the strange fruit hanging from the trees. The armies square off, and in a huge rush, the Christian army charge into the pirates.

A hammed-up sword fight takes place on the stage in front of the Town Hall between our noble Captain and the Pirate King. A huge cheer accompanies the latter’s death and Sóller is saved once more to party long into the night, our 1561 plaza stage quickly transforming into a pulsing DJ-driven dance floor.

Es Firo is chaotic and utterly unique. Very quickly the borders between participant and audience dissolve and you’ll be immersed in the shifting fates of Sóller. You’ll find yourself cheering for both sides of the fight, taking up the football chants favoured by the crowd, pumping your fists at the impassioned victory speech of Sóller’s noble Captain. And offering up fervent thanks for your earplugs.

When: The Monday after the second Sunday of May

Where: Soller on the island of Mallorca, Spain

Beyounceback? Beyoncé might have sang the Star-Spangled Banner after all

MOVIE REVIEWS: This Must Be The Place + trailer + Titanic 3D + Headhunters