Donald was hardly a household name before he was called up as the fourth-string number 10, replacing third choice Aaron Cruden, for the All Blacks side to play in the World Cup final.

In fact, he was quite maligned due to ordinary performances previously for his country.

But he became a superstar in one kick, the one that clinched the Cup 8-7 against France.

The script for The Kick, to air on TV One, was written by Dominion Post cartoonist Tom Scott, one of many who enjoyed poking fun at the Waikato playmaker.

“I wouldn’t have thought in a million years that I would be the one doing it,” he told stuff.co.nz of the classic sporting hero tale of redemption. 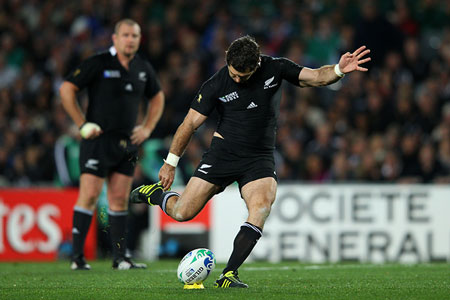 Scott says he was impressed at the way Donald handled criticism and ridicule from fans and commentators.

“He couldn’t bear to watch the All Blacks play in the tournament – he was lying on the couch, drinking beer and eating chips,” Scott says.

“Then his mate persuaded him to go whitebaiting and he gets a call from Graham Henry.”

The rest, as they say, is history.