The Wizard of Oz talks darts, mullets and never giving up

There’s more than a touch of the everyman about Simon Whitlock, the Sydneysider now ranked fifth in the world of professional darts. There’s the outrageous braded mullet and the rust-coloured goatee. In the new, jazzed-up world of darts, each player has his own theme song and Whitlock has, naturally, chosen Down Under by Men At Work as his signature tune. But, more than these trappings, it’s the fact Whitlock has been a late bloomer that keeps him connected to punters in pubs who fancy themselves as darts masters.

“Giving up is the most common mistake,” Whitlock says, his advice to others hoping to emulate his slow-burn success. “Three bad darts don’t make you a bad player, the same as a 180 doesn’t make you the best in the world. Keep at it, keep practising and working hard and ability will always shine through eventually.”

Whitlock, 43, battled away for years on the Australian circuit, and it wasn’t until a couple of years ago that the floodgates opened. In 2010, Whitlock, went on an unlikely run to the final of the World Championships – he lost to Phil Taylor, the sport’s most dominant player, who beat Whitlock to win the tournament for the 13th time. But Whitlock’s journey from dangerous outsider to top-liner was complete and he has since held his ground in the elite bracket.

“Once I had the run to the World final, it opened up so many doors for me,” he says. “It was really important to get sponsored and my management do a fantastic job now. I always felt I had the ability but now I’m surrounded by the right people, doing things the right way, and I can concentrate purely on what I’m good at, which is playing darts. Also, the more I improve and achieve, it spurs me on to do even better.” 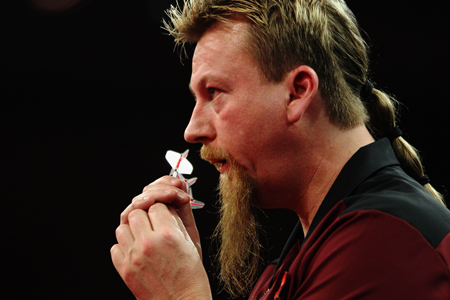 At the moment, Whitlock is competing in the latter stages of the Premier League of Darts, a round robin between eight of the world’s top players, in which he is making his third straight appearance. In the final round this week, Whitlock must beat Englishman Adrian Lewis to secure the highest possible position in the standings but, either way, the Australian is on track for a place in the finals, which will be held at London’s 02 Arena on Thursday, May 17.

“I’m really happy with how I’m playing at the moment,” Whitlock says. “I’m happy with my set-up and everything is going well. To be sitting second in the Premier League is fantastic. I’ve put myself in a great position to qualify for the finals, and I’m confident I can. It’s in my own hands and I’m after a few more points to be certain.”

Should Whitlock make it through to the playoffs next week, though, he, like every other player, knows that the road to glory goes through Taylor, whose edge over the competition is unquestioned. Drawing parallels with other dominant sportsmen – Woods, Jordan, Gretsky – tends to raise an eyebrow, perhaps because darts can still be played while nursing a beer, but Taylor’s record is comparable.

“Phil will always be separated from the rest. He is a bit of a freak in terms of ability,” Whitlock admits. “There are a lot of factors that go in to it – one player might have more natural ability whereas another might have more desire and dedication. But with Phil, he’s got it all.”

Darts, perhaps a little like golf, is a peculiar sport in that a player’s performance is entirely in their own hands – there is nothing a player can do to prevent an opponent throwing accurately; there are no tactics to be tweaked or adapted, no defensive strategies to be employed. It is a sport played substantially between the ears.

“I think about hitting what I’m going for,” Whitlock says. “I try and block everything else out when I’m actually throwing. I try and approach every match exactly the same. Of course, the build-up gets bigger and so do the crowds and coverage, so maybe there is a little bit more pressure.” 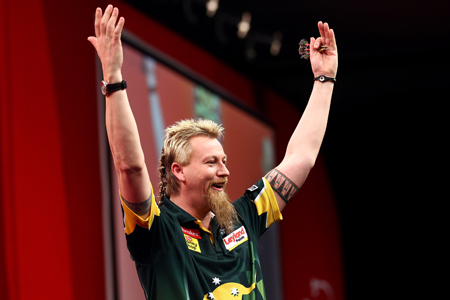 Darts may seem a sport custom-made for gamesmanship, for players getting in each other’s ears at crucial times. But Whitlock insists it’s all very gentlemanly. Besides, as the lone Australian in the sport’s upper echelon, he probably has an inbuilt advantage when it comes to sledging.

“Of course, there is banter but it’s all good and light-hearted – some of my best friends in the game are Brits too,” he says.

“Different players try different things, but personally I’m too busy concentrating on my game to worry about what’s going on around me. But generally, there is great mutual respect in darts, although you will always get some players trying things to get a slight advantage.”

Darts has endured a cosmetic makeover in the professional era – it’s all packaged up with a bit more attitude and the players, excruciatingly, all have little nicknames. Whitlock, aka The Wizard, has probably got off lightly.

“I can’t think of one that stands out as particularly bad,” he says. “My own was a bit of a no-brainer – I had to get Australia in there so ‘The Wizard of Oz’ was born.”

Yet somehow, in this image-conscious age, no marketing guru or PR flack has forced Whitlock to lop off that glorious plumage, a mullet that doesn’t so much as invite derision as inspire awe. On the contrary, Whitlock’s audacious, throwback mullet has become his trademark.

“It’s part of me,” he insists. “When I broke my foot last year it did start to get quite knotty and uncomfortable so that’s why I had it braded but I have no plans to chop it off.”

There you go. Once again, attention to detail is what separates the best from the rest.

BBC plans digital download shop for all your old favourites