Theatre: Other Desert Cities and Another Country

In the attractively reconfigured in-the-round Old Vic, The West Wing contributor Jon Robin Baitz’s 2011 family drama, Other Desert Cities takes us to Palm Springs in 2003 where the Wyeth family have gathered over Christmas.

The holiday mood swiftly turns sour as their political differences are flushed into the open by writer daughter Brooke’s plans to publish her memoirs. In them, Martha Plimpton’s determined yet vulnerable Brooke (now recovered from a lengthy and incapacitating episode of depression) blames her parents for the suicide of her older brother.

Her staunchly Republican parents (Sinead Cusack’s brittle, polished Polly, a former script writer – born Jewish but now as Wasp as they come) and husband Lyman (a Hollywood actor turned ambassador with a hotline to their good friends Nancy and Ronald Reagan) are horrified. Polly’s liberal sister Silda (fresh out of rehab and craving even a sniff of alcohol) takes the opposite view and Brooke’s surviving sibling Trip (a producer of populist TV shows) tries his best to neutralise an increasingly inflammatory situation.

The script is intelligent, the production (directed by Lindsay Posner) well-acted, yet for much of the time it fails to engage – perhaps the private past of this dysfunctional family resonates more with American than British sensibilities. 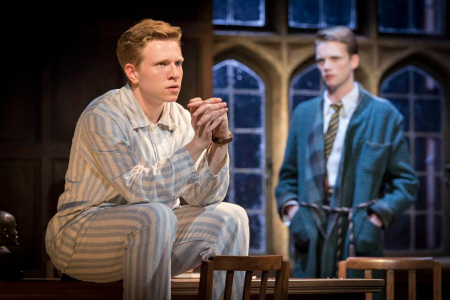 Julian Mitchell’s 1981 hit Another Country put Kenneth Branagh and Rupert Everett on the road to stardom, and the young, all-male cast in Jeremy Herrin’s timely revival (a transfer from Chichester) acquit themselves well in this enduring, fact-inspired and still compelling drama.

Set in the hothouse atmosphere of a boys’ public school in the 1930’s, it imagines the circumstances influential in turning the highly educated British Intelligence Officer, Guy Burgess, (here renamed Guy Bennett) into a Soviet spy.

The cloistered world of single-sex education acts as a microcosm of the political world outside, a place where these embryo pillars of society can practice their skills at winning votes and influencing people – and hypocritically ensure that any homosexual activity remains an unspoken secret kept within the walls of the establishment.

Recent drama school graduate Rob Callender excels as the provocative, defiant Bennett, Will Attenborough keeps his nose to the grindstone as the Marxist Judd (another outsider whose preferred under the covers activity is reading Das Kapital by torchlight) and Julian Wadham (who played head of house Barclay over three decades ago) returns as a fruity writer and former conscious objector who comes to tea, much to the embarrassment of his practical nephew Devenish.

Sick of seeing celebs do ice bucket challenges? We all are… but this one you HAVE to see

It’s a Family Affair at the Melbourne Cup