What do deadly snakes and festivals have in common? Australia has the more of them per capita than anywhere in the world. That’s Australia for you, life on the edge, full of thrills and spills and hey, what doesn’t kill you only makes you stronger, right?

This just proves that people are whingers, no matter where they are. Complaints aside, the best thing about Aussie festivals is the atmosphere. Sure, we don’t always get the big names or Kate Moss rolling around in the mud wearing short shorts, but we do have the vibe. The sun is shining (well, usually), the clothing is sparse (always) and people are generally having a sweet time, all for the love of the music.

So whether you like to dance, mosh, skank, sway, shuffle or all of the above, there will be something for you. And it doesn’t matter where you are, the festivals move around so as long as you can get to a capital city or sometimes even a country field, then you won’t miss out. Hell, even Tasmania gets one of the coolest festivals in the country at New Year’s.

So, to help stop your head exploding trying to work out where, when and how much, here’s the low down… 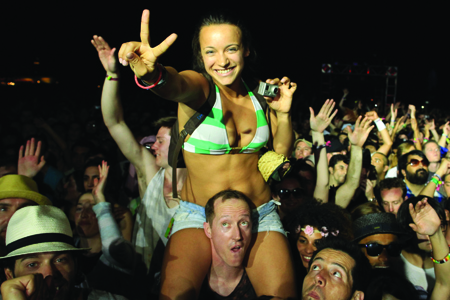 WHAT: Set in the beautiful Glensworth valley about an hour north of Sydney this is one of the ultimate escape festivals. Music, arts and sustainability are the watch words for this festival headlined by some of Australia’s ultimate Folk and Rock acts like the John Butler Trio, The Medics, The Cairo’s and Battleships as well as many, many more.
WHERE/WHEN: Glensworth Valley (an hour north of Sydney), 29 Dec – 1 Jan.
HOW MUCH: Three-day passes for $340 + bf or you could volunteer and get in for free. The festival are looking for helpers for everything from childcare to marketing. Shifts last around five hours so you still have plenty of time for the music.
MORE INFO: peatsridgefestival.com.au

WHAT: Australia’s premier dance festival is back for another big year with a huge lineup of dance acts including Diplo, Calvin Harris and Tiesto.
WHERE/WHEN: Sydney (Nov 24), Perth (Nov 25), Adelaide & Melbourne (Dec 1), Brisbane (Dec 2).
HOW MUCH: $174.95
MORE INFO: stereosonic.com.au

WHAT: You’re probably going to be a little hung over from New Years Eve but the best cure will be a little hair of the dog. Oh, and some of the top indie/dance acts in the world including Hot Chip.
WHERE/WHEN: The Domain, Sydney. Jan 1.
HOW MUCH: $118 + bf.
MORE INFO:fielddaynyd.com

WHAT: Despite the questionable quality of punter this is the big one, the biggest festival in Australia. Regularly attracting the biggest names touring and this year is no exception. The Red Hot Chilli Peppers will be headlining a 37 act lineup.
WHERE/WHEN: Syd (Jan 18), GC (Jan 20), Adl (Jan 25), Melb (Jan 26) and Per (Jan 28).
HOW MUCH: $165 + bf
MORE INFO: bigdayout.com 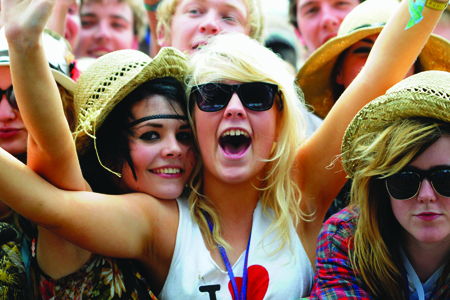 Festival of the Sun

WHAT: Known as FOTSUN to the locals, this single stage, boutique rock and folk festival has a limited capacity of only 3,000 people so it’s important to book tickets fast.
WHERE/WHEN: Port Macquarie, Dec 14-15.
HOW MUCH: $160, including camping.
MORE INFO: fotsun.com

WHAT: If you’re not in Sydney over the New Year break but don’t feel like sleeping for a few days you could always go to a 12 hour dance festival. Featuring The Chemical Brothers, Mark Ronson, M.I.A, SBTRKT, Knife Party Booka Shade and cover girl Kimbra just to name a few. This festival is surely going to be one not to miss as it makes it’s way around the country in early January.
WHERE/WHEN: Adelaide (Dec 31), Melbourne (Jan 1), Gold Coast (Jan 5) and Perth (Jan 6).
HOW MUCH: From $139 depending on city. They even have a buy now pay later scheme where you can pay off the tickets fortnightly.
MORE INFO: futureentertainment.com

WHAT: The idyllic surrounds of Phillip Island doesn’t mean the music will be chilled. This festival rocks the new year with 360, Children Collide, Closure in Moscow, PNAU and many many more.
WHERE/WHEN: Phillip Island, Victoria, Dec 30 – Jan 1.
HOW MUCH: Two-day pass starts at $279 and includes camping.
MORE INFO: thepyramidrockfestival.com 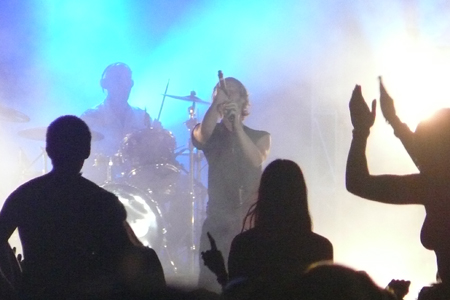 WHAT: Hey boys, hey girls! Once you’ve seen one fireworks display you’ve seen  them all so why not bring in 2013 dancing your nut off on iconic Bondi Beach with Fedde Le Grand, Knife Party and the Chemical Brothers. Then when it all gets too much, take a dip. But don’t tell your mum we said that.
WHERE/WHEN: Bondi Beach. Dec 31.
HOW MUCH: From $128 + bf.
More Info: shorething.com.au

WHAT: One of the festivals that has emerged in recent years as a real highlight of the summer. Held over four days across the New Year in scenic Victorian seaside town of Lorne and in beautiful Marion Bay in Tasmania a huge line up of international and local acts will swap through halfway. This years lineup includes American psych rockers The Flaming Lips on NYE.
WHERE/WHEN: Lorne (Vic) and Marion Bay (Tas), Dec 29-31.
HOW MUCH: Lorne is sold out, but it’s $216+bf for the three-day Marion Bay festival.
MORE INFO: fallsfestival.com.au

NYE On the Harbour

WHAT: Lit by the world famous fireworks display the Harbour City will be the perfect backdrop to some sweet dance tunes. Aussie dance heroes PNAU will bring in 2013 for Sydneysiders along with Ajax, Yesyou, the Sosueme DJs, Elizabeth Rose and more. Then the gang are tiding over Perth on January first to do it all again. No need for any sleep then.
WHERE/WHEN: Syd Harbour Dec 31 – Perth Jan 1
HOW MUCH: From $93
MORE INFO: falcona.com

WHAT: A brand new dance festival comes to Queensland’s party capital for 2013. Featuring the Chemical Brothers, M.I.A, Hot Chip as well as a host of  other local dance and indie talent Summafieldayze promises to be great.
WHERE/WHEN: Gold Coast, Sat, Jan 5.
HOW MUCH: Starting at $95.
MORE INFO: summafielddayze.com.au

WHAT: Historically a festival for purely home grown acts Homebake has taken the surprising step of announcing it’s first international act ever for 2012. American glam punk veterans Blondie headline another top lineup of Aussie and Kiwi acts – including cover girl Kimbra – the heart of the city of Sydney at the Domain.
WHERE/WHEN: Sydney, Dec 3.
HOW MUCH: $95 + bf.
MORE INFO:  homebake.com.au 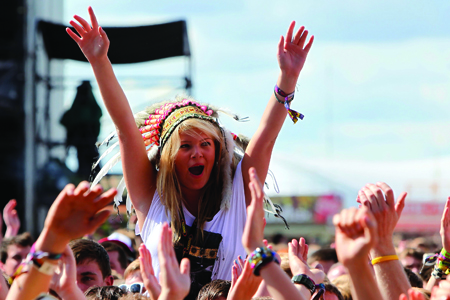 WHAT: Traditionally one of the earliest festivals on the summer cycle, Harvest represents a perfect way to ease into it all. This is a decidedly Rock’n’Roll flavoured festival in 2012 with veteran songwriters Beck and Ben Folds Five amongst the lineup.
WHERE/WHEN: Melbourne (Nov 12), Sydney (Nov 13), Brisbane (Nov 19).
HOW MUCH: $150 + bf.
MORE INFO: harvestfestival.com.au

WHAT: What started out as a little folk festival on the outskirts of Coolum has now blossomed into a full blown Rock, Dub and Folk music bonanza come November. Look out for Fat Freddy’s Drop and Something for Kate headlining. 2012 Golden Days Festival promises to be huge.
WHERE/WHEN: Coolum Sports Complex,Queensland. Nov 17-18.
HOW MUCH: $86.50 + bf
MORE INFO: goldendaysfestival.com 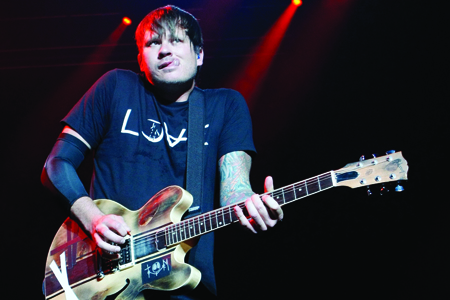 WHAT: This is one for the hard rockers and headbangers. Metallica, Linkin Park and Blink 182 are just a few of the acts playing. Should be an absolute banger.
WHERE/WHEN: Brisbane (Feb 23), Sydney (Feb 24), Melbourne (Mar 1), Adelaide (Mar 2), Perth  (Mar 4).
HOW MUCH: $155.
MORE INFO: soundwavefestival.com

WHAT: Perhaps the flagship boutique festival of the year, the St Jerome Laneway festival is the absolute favourite of the super hipster crowd. From its humble beginnings in Melbourne’s back streets it has grown into a huge event on the music calendar, including shows in Singapore and NZ. Catch Bat for Lashes, Alt-J (pictured) and much, much more.
WHERE/WHEN: Singapore (Jan 26), Auckland (Jan 28),
Brisbane (Feb 1), Sydney (Feb 2), Melbourne (Feb 3), Adelaide (Feb 8) and Perth (Feb 9).
HOW MUCH: $140+bf
MORE INFO: lanewayfestival.com.au

WHAT: Bluesfest runs for five days each Easter just outside Byron Bay, the perfect place for this chilled-out hippy heaven. Acts for this years Blues haven include the awesine Ben Harper, punk icon Iggy Pop and his indomitable sidekick Stooges and American crooning hearthrob Chris Isaak. This is a unique festival in tersm of its focus on Blues, Country and Reggae music and is hugely popular. If you’re thinking off going better book soon.
WHERE/WHEN: Tyagarah Tea Tree Farm, Byron Bay. Mar 28- April 1.
HOW MUCH: $495 (five-day) or $345 (three-day), plus more for camping. Early bird tix on sale now.
MORE INFO: bluesfest.com.au

A Day on the Green

WHAT: This festival mixes music and wineries and runs across the summer months. This summer’s tours includes The Hoodoo Guru’s, Simple Minds, Devo, The Angels and Dave Gleeson.
WHERE/WHEN: Seventeen different venues across all Australian states and New Zealand.
HOW MUCH: From $140.
MORE INFO: adayonthegreen.com.au

Chain Gang Travels in the US