Taking on the same role, Homeland’s Damian Lewis is almost unrecognisable as small-time hustler Teach – his extravagant sideburns and outsize moustache earn him his first laugh of the evening before he’s uttered a single word.

Set in a tacky junk shop (Paul Wills’ claustrophobic design canopies the stage with a clutter of suspended bicycles) this tough-talking three–hander with its starry cast centres on a small American coin – with a face value of just a nickel – which shop owner Don wants to steal back (along with the rest of the purchaser’s collection) when he gets it into his head that it must be worth a lot more than the $90 he’s just sold it for. And Teach wants in on the heist, cutting out Don’s junkie gopher Bob (a pale, shaven headed Tom Sturridge) who has loser written all over him. 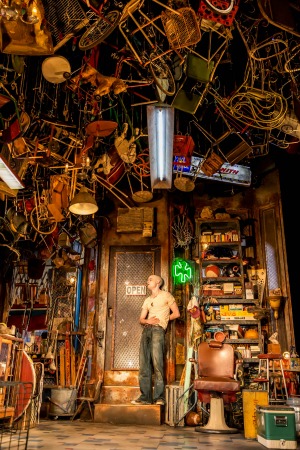 It’s more dialogue than action, with Mamet brilliantly capturing the streetwise colloquialisms and expletive-spattered speech rhythms of these inept, inarticulate petty criminals whose loyalties are as fluid as their morals. And director Daniel Evans gets strong performance all round with John Goodman’s solid, cardiganned Don providing the only suggestion of decency among this trio of no-hopers who are still hopelessly in pursuit of the American dream.

Snort it out! Snorers’ sex lives get the push

Departing Down Under – Going Home