To the songs of their 2004 concept album (and additional numbers) it tells – somewhat perfunctorily – the story of a trio of disaffected boyhood friends who want to escape the stifling restrictions of their suburban life and head for the city.

At the last minute, Steve Rushton’s Will finds out his girlfriend is pregnant and stays put, bored and boozing, on the sofa. But Tunny is seduced by ads to join the army and Johnny embarks on a self-destructive spree of drug-taking which costs him his new relationship with X-Factor finalist Amelia Lily’s Whatshername.

There’s a lot of anger in this punk rock musical – especially in Alexis Gerred’s Tunny and in Aaron Sidwell’s crotch-clutching Johnny, who’s too apathetic even to bother to wash. Familiarity with the lyrics certainly helps – it’s loud, it’s raucous, and one welcomes the few quiet moments. But there’s no denying the sheer raw energy and passion of this muscular 90 minute musical. 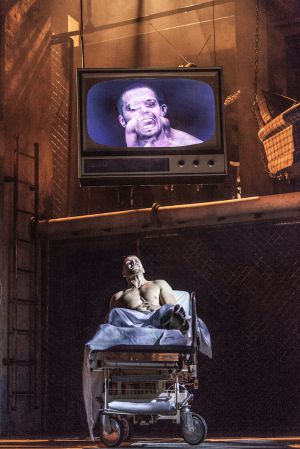 A Major crush on One Direction