Topped and tailed by an execution, this new work doesn’t have quite the same distinctive voice, but Matthew Dunster’s very 60’s production is still well worth catching for spot-on performances, Anna Fleischle’s astonishing design and McDonagh’s irreverent dialogue.

Set predominantly in an Oldham pub on the day in 1965 when hanging was abolished in Britain, it centres on a fictional hangman called Harry Wade who doesn’t know when to shut up and who resolutely maintains that he’s every bit as good as Pierrepoint, the real life chief executioner credited with efficiently snuffing out over 400 individuals, including a significant batch of World War II criminals. In an ill-advised interview in the local paper, Harry (who, like his rival, is also a publican) has blown his own trumpet a bit too loudly, and his callous past behaviour – briefly illustrated right at the start by his cold-hearted despatch of a vociferously protesting, probably innocent young man (for Hennessy read Hanratty) – is about to have repercussions. 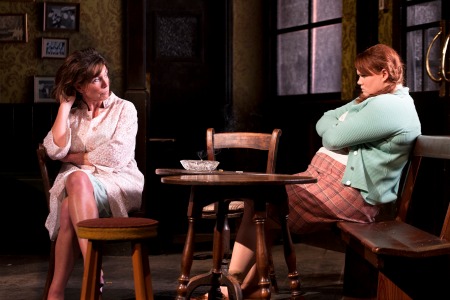 There’s more than a hint of Pinter in the writing, and the good looking but vaguely menacing stranger from down south (Johnny Flynn) could have walked straight out of a Joe Orton play. David Morrissey (all puffed up with his own importance in front of his cronies) is on top form as Harry, and Reece Shearsmith is subtly pervy as the disgruntled former assistant who helped him bring many people’s lives to a swift – and not necessarily justified – end.

Video: Prince Charles DJing – The Prince of Wales on the wheels of steel