Never heard of Franklin? Well neither had I, nor I suspect, have most people – but her research was crucial to the unravelling of the molecular structure of DNA, work which garnered a Nobel prize for the famous Crick and Watson (portrayed here as an amusing double act by, respectively, a sophisticated Edward Bennett and an impulsive, shock-headed Will Attenborough) and Franklin’s less well known colleague at King’s College, Maurice Wilkins.

Determined to become a scientist from a very young age, Franklin dedicated her sadly short life to her work – and (despite brief, telling moments of melting warmth) is shown here as predominantly spikey, dedicated, and difficult to get to know – at least partly a result of being a woman in what was very much a man’s world, a place where her sex banned her even from lunching in the Senior Common Room.

Against the backdrop of Christopher Oram’s atmospherically grey, bomb-damaged set, Franklin fails to resolve her differences with Stephen Campbell Moore’s gauche Wilkins and proves too much the perfectionist to take the imaginative leap of faith which might have enabled her to realise just how much information was contained in the crucial Photograph 51. 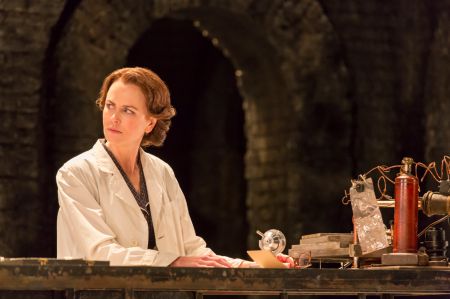 Wittily written (and fluently directed by Michael Grandage), American playwright Anna Ziegler’s short drama captures the drive, the excitement – and the hard slog- of scientific breakthrough and a dowdily dressed Kidman captures every nuance of a complex, almost forgotten character.