While Helen Mirren reprises the royal role on Broadway, award-winning writer Peter Morgan’s hit play is back in the West End (slightly updated since its 2013 premiere) now with Kristin Scott Thomas as the monarch who has been on the throne for over 60 years. 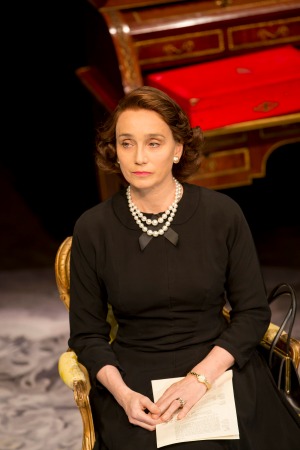 During that time, Elizabeth II has seen a dozen Prime Ministers come and eleven of them go (though with press night just days before the general election, Morgan reputedly had another scene in reserve for later performances should Cameron have been ousted). Once a week, she has held a completely confidential, un-minuted meeting with the current incumbent – and only the participants (and maybe those famous corgis) will ever know what was really said.

So Morgan has comparatively free rein to imagine the exchanges that might have taken place behind the closed doors of Buckingham Palace – from the early ‘50’s when the soon to be crowned Elizabeth, just 27 years old, held her first meeting with veteran politician Winston Churchill (David Calder) to the present day with the now octogenarian queen nodding off with boredom at what Cameron has to say. 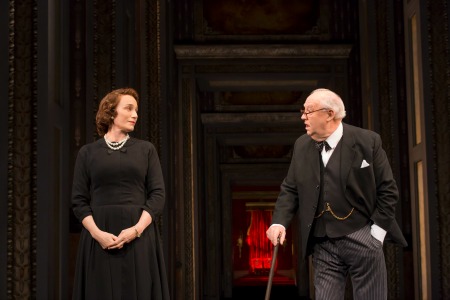 Nicholas Woodeson’s Labour Harold Wilson is shown as, possibly, the favourite of a woman who is constitutionally bound to remain impartial, whilst Sylvestra Le Touzel’s flinty Margret Thatcher is made to realise that (in some respects at least) she’s met her match in this well-informed sovereign.

Stephen Daldry’s slick production effortlessly orchestrates swift changes in costume and time, and Scott Thomas makes a cool, somewhat haughty Queen, schooled to keep her emotions in check – except when the future of her yacht is under threat.

Woods back into top 10 after win