Del Bosque said Spain controlled the game in their 4-0 victory over Italy, but conceded that Cesare Prandelli’s side were unlucky in having to play almost the last 30 minutes with 10 men.

“Everyone loses sometimes and the Italians have played a great tournament. They had the bad luck of the injury to Thiago Motta and that is where it ended for them unfortunately, but their reaction was great,” he said.

Motta pulled a hamstring in the 62nd minute and Prandelli had no substitutes left, having also lost defender Giorgio Chiellini to a pulled muscle in the first half and made another substitution – Antonio Di Natale for Antonio Cassano – at halftime.

Del Bosque said Italy had enjoyed a good spell after Spain had taken an early lead through David Silva, but his side “controlled the game” after Jordi Alba struck the second four minutes before halftime from a pass by Xavi in “the perfect counter attack.”

“We had the ball possession, the pressure, the depth. This success is something historic and now we have to look to the future,” he said.

“We are talking about a great generation of footballers. They have roots, they know how to play and have come from a country which knows how to play. We have done a great job.

“We have great lads who play abroad and that was impossible before. Now foreigners want our players so this is a great era for Spanish football.” 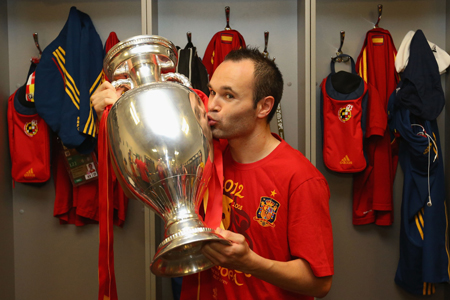 Del Bosque, who has become only the second coach to lead sides to both the European Championship and the World Cup after Germany’s Helmut Schoen, said the next aim would be to qualify for the 2014 World Cup in Brazil, but the coach added “we don’t only have to think about Brazil but afterwards as well.”

Del Bosque meanwhile said he had spoken to King Juan Carlos and Crown Prince Felipe, who was at the match.

“They were very excited and told us they would see us tomorrow. They are happy as are all Spanish people. This is an extraordinary night for them.”

Prandelli said his side could not compete with Spain after running out of steam following injuries and a day’s less rest. However he would give his side “eight of 10” for the tournament.

“We were completely spent energy-wise. When we tried to attack and win the ball we couldn’t come back and cover. We were tired, that’s all we can say really,” he said.

Prandelli, who has been interested in returning to club football, said he would like to continue in the job.

“This project needs to continue. We want to continue and this team to grow.”

Film: Plot for Peace with Q&A with Jean-Yves Ollivier