Charred wooden beams form the backdrop to successful middle-aged master builder Halvard Solness’s office, his house, his garden. They’re the ever present reminder of the terrible tragedy which blighted his life and that of his wife Aline whilst simultaneously providing the opportunity for his career to flourish. Now, he fears the young talent creeping up on him in the shape of his undervalued assistant (Martin Hutson) and feelings of guilt have made him thoughtlessly callous in his treatment of those around him.

Into this arid environment strides Aussie Sarah Snook’s wholesome, hearty Hilde Wangel (a bright, life-affirming contrast to Linda Emond’s unhappy Aline in her head-to-toe black). A decade ago, when she was just a child, Solness foolishly promised her a kingdom in a moment of elation – and she’s come to claim it. 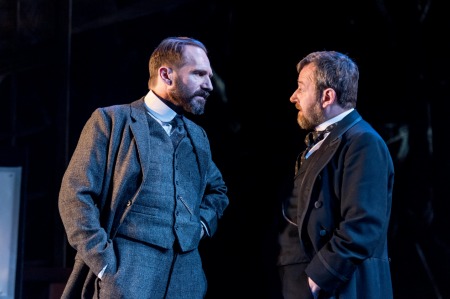 David Hare’s fluent new adaptation successfully embraces Ibsen’s mix of the realistic and the mythical – not to mention the unmistakable symbolism of the vertiginous spire Hilde wants her hero to climb. And, throughout, a first–rate Ralph Fiennes absolutely commands the stage, revealing the complexity of the newly invigorated Solness as his aspirations are fatally rekindled by the unexpected arrival of a confident, demanding young woman.

Man buys prosthetic limbs and hangs out with goats