But it seems to work for ultra decent Nepalese business student Kalyan (who wants to get on, but just lacks that killer instinct) in Jesse Eisenberg’s sharply comic, partially recast, off-Broadway transfer.

Eisenberg (he was nominated for an Oscar for his performance as Mark Zuckerberg in The Social Network) not only wrote the play but also excels at playing needy, nerdy Jewish misfits and he’s on top form here as the restless, insecure Ben (he was chucked out of film school, but daddy paid for the flat) whose rather bizarre scatological fantasies surrounding the girl he was in love with at the age of eight are reawakened when he meets up with their mutual old schoolmate, Ted, who’s now her fiancé. 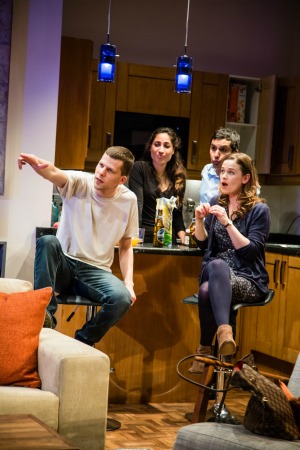 There’s little plot as Ben’s behaviour becomes increasingly unacceptable, but director Scott Elliott ensures an entertaining evening with a strong cast – Kunal Nayyar’s PowerPoint-obsessed Kalyan turning a dinner party invitation into a Microsoft presentation, Annapurna Sriram as his more spirited medic girlfriend who appreciates his good qualities but perhaps wishes he had just a bit more backbone, and Katie Brayben as Sarah, the unwilling object of Ben’s obsessions. Alfie Allen (from Game of Thrones) contributes a nicely judged performance as straightforward Ted, the rather bland banker she’s chosen to marry and Eisenberg proves that he’s every bit as watchable on stage as on screen.