The musical stage adaptation of Roald Dahl’s Matilda has been running for years, and Charlie and the Chocolate Factory is about to get its third Willy Wonka, but, although it certainly has its moments of darkly disgusting, yucky humour – plus some Morris dancing and an uplifting closing hymn to lighten the mood – Enda Walsh’s new adaptation of Dahl’s short 1980 children’s novel places too much emphasis on a rather boring invented subplot to thoroughly engage. 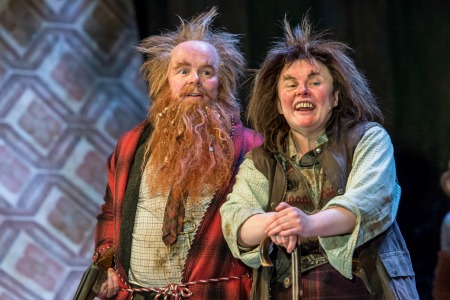 With his fondness for excess, Walsh is in some ways the ideal candidate to bring the gruesome, cruelly vindictive behaviour of the irredeemably vile Mr and & Mrs Twit to the stage – and Jason Watkins (with a filthy long beard from which he plucks morsels of stale food to snack on) and Monica Dolan (as his grotesque one-eyed wife serving him platefuls of spaghetti laced with worms) give it all they’ve got as they whack each other with frying pans. 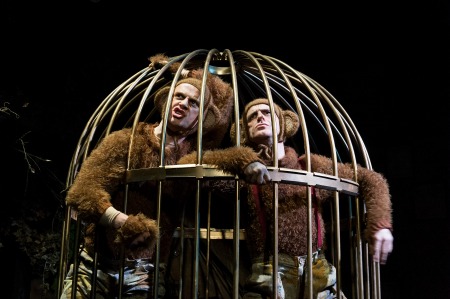 The sympathetically observed Muggle-Wumps (a family of caged talking monkeys who are desperate to escape but too scared to do so) are nicely played by a quartet of actors who – under the guidance of directors John Tiffany and Steven Hoggett – have obviously been studying the behaviour of our simian cousins. And Chloe Lamford’s ingenious set is full of clever surprises. But the three entertainers who arrive in an attempt to get back the fairground they lost years ago really aren’t very interesting – and the loudest laugh they raised came courtesy of a little boy in the audience who emitted a loud “Oh no!” when Yorkshire Terrier Man started to undo his trousers in an effort to escape a truly sticky situation.

The Church is on the move