Witty, clever and endlessly inventive, Tom Stoppard’s award-winning 1974 comedy will really keep you on your toes. With its nimble word play, liberally scattered literary references and talk of art and revolution, it’s an intellectual gem which shows off this award-winning  playwright’s magpie brain yet still keeps us consistently entertained – especially with director Patrick Marber (himself a dramatist of considerable distinction) in control of the production. 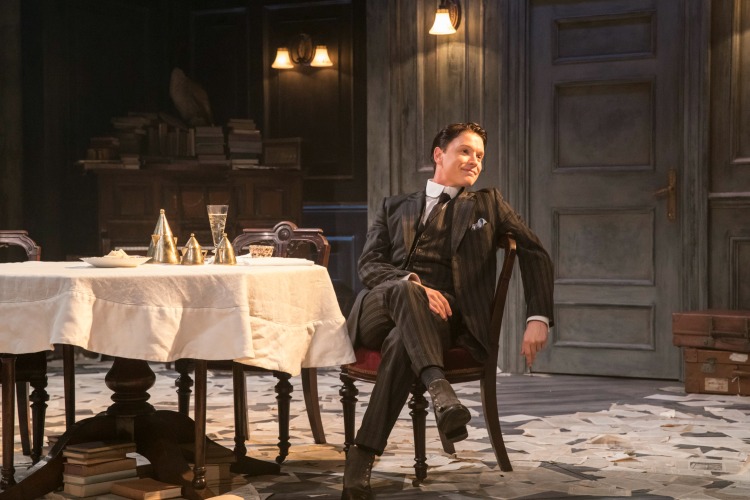 It’s a scintillating mix of fact liberally spiked with fictional embellishment which brings together an unlikely trio of famous real characters – Dadaist artist and poet Tristan Tzara (Freddie Fox in sparkling form), Lenin with his revolutionary plotting, and Peter McDonald’s serious James Joyce (in the throes of writing Ulysses) – who were all in Zurich in 1917, along with minor British diplomat Henry Carr (he was real too). Now in old age, shuffling in dressing gown and tattered straw hat, this former civil servant reminisces about his wartime years in Switzerland, muddling it all up with excerpts from Oscar Wilde’s The Importance of Being Earnest in which he appeared, directed by Joyce.

Having tried his best to despatch Tom Hiddleston on TV’s The Night Watchman, Tom Hollander is here in far more genial mode as the rambling Carr, registering a myriad emotions as his jumbled memories tumble to life before us. It’s an immensely endearing performance in a playful production packed with puns, littered with limericks, served up with a delicious dollop of laugh-out-loud comedy and topped off with a little white rabbit. A West End transfer surely beckons.