After reading the first few pages of the book written about him by white South African writer Jonny Steinberg, Somali refugee Asad Abdullahi refused to read any further – having lived through it once, his story was just too upsetting to revisit in its totality.  I don’t know whether he’ll be able to face seeing Isango Ensemble’s powerful semi-operatic adaptation for the stage, but for the rest of us, this award-winning South African company (under the skillful direction of Mark Dornford-May) combines glorious singing and lively dance, soul-stirring marimba music, humour and tragedy in a powerful insight into one man’s fortitude in the face of life-threatening, potentially soul-destroying adversity.

Having seen his mother shot before his eyes in 1991 when he was just 8 years old, Asad’s traumatic journey took him from Somalia to Kenya, from Kenya to Ethiopia and, later, as a young man on an equally treacherous economic migration through Tanzania, Zambia and Zimbabwe to a South Africa which turned out not to be the promised land he hoped for.

There’s much kindness from relatives – but even more cruelty from strangers – and the cast of the Cape Town-based ensemble (including young Phielo Makitle as Asad as a boy and Pauline Malefane who takes him in and then has to leave him behind) do full justice to this tribute to the resilience of the human spirit. 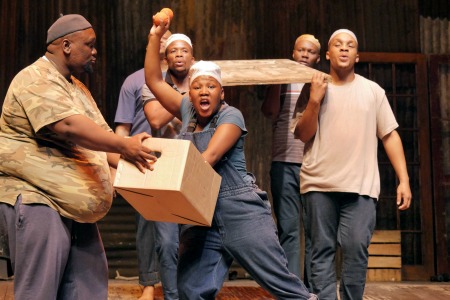 The Church is on the move