Thrill of the race: the quirkiest fun runs across the country

We get it. You’re living abroad, you’re travelling the world, you’re having the time of your life. Probably the only exercise you’re getting is when you’re sprinting through airports or to that impossible-to-find travel agent where you booked that non-refundable ticket. No one wants to be the buzzkill waking up every morning training for a marathon while everyone else is nursing hangovers or lulling the day away. Yet not all marathons and races require their participants to be as fast and serious as Usain Bolt. From running through the streets in nothing but your Speedos to a fun run that feels like rave, Australia offers heaps of races for all levels of fitness, no matter what your goals or reasons are. There’s even a race where you’re chased by zombies planned for next year. So get those trainers laced up, because we’re here to bring you five of Australia’s best and most fun races. 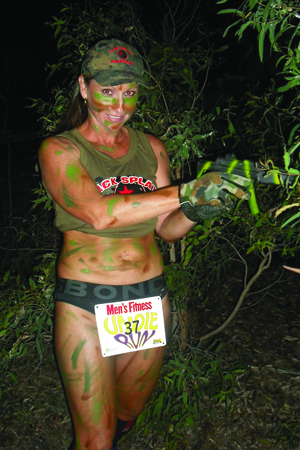 The first place winner will take home the Gold – the Golden Boxers that is. It’s a unique race and one worth making the trip up to Hervey Bay for. This May marks the second annual Australian Men’s Fitness HBT Great Undie (and PJ’s) Run. There’s only a few simple rules to this 1.6km race: undies, or PJ’s, including but not limited to briefs, g-strings, dressing gowns, teddies and y-fronts must be worn – whether it’s above or instead of your running gear. Aside from the awesome advantage of running in your undies (or PJ’s), the race raises money for the Forget Me Not Children’s Home. All entry fees go toward the charity, and additional donations will be made for any runners donning Tuffeys or Tuffettes. Run, walk or crawl (in an animated fashion) across the finish line. Whatever you do, you’re sure to have fun in this one. 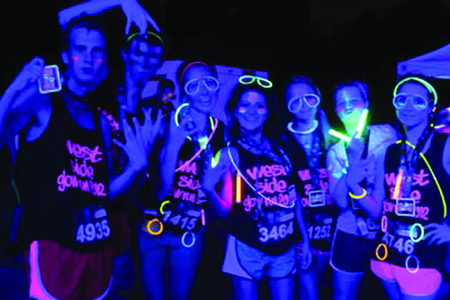 It’s not just your time to shine – it’s your time to glow. This is an event that was so contagious, it’s now making its way around Australia. Kicking off in Melbourne with races planned for Sydney, Perth and Brisbane, The Glow Run is a 5K party that starts when the lights go out. Organisers encouraging participants to don either their glow-in-the-dark event T-shirts, glowsticks and gear or to get as crazy and creative with their attire as possible. Ever felt like running a race dressed as Superman or Superwoman because you really do think you’re just that super? Don’t hold back. Go out and glow like the champion you know you are with the Glow Run. It’s an un-timed, participation event with DJ’s pumping beats all along the way to get you into the groove, whether it’s walking, running or dancing. 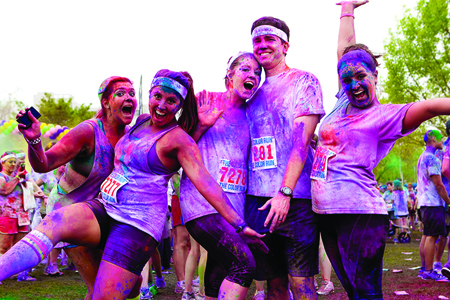 Think India’s colourful Holi celebrations meets running, and what do you get? The ‘Happiest 5K on the Planet’, better know as the Color Run. If you’ve never raced before, then you can guarantee the Color Run is the greatest way to make a splash in the world of racing. It’s an un-timed race, so there’s no need to be able to run a kilometre in under five minutes. The only thing you need to worry about as you come up on each kilometre-mark is getting soaked with as many wonderfully bright colours possible. You’ll emerge from the race as the most awesome double rainbow ever to exist. The Color Run made its Australian debut in 2012, and its popularity exploded across the nation. If you missed it last time around, don’t fret, it will be back and making its mark around Oz once again, kicking off up on the Gold Coast in April and Sydney again in August. 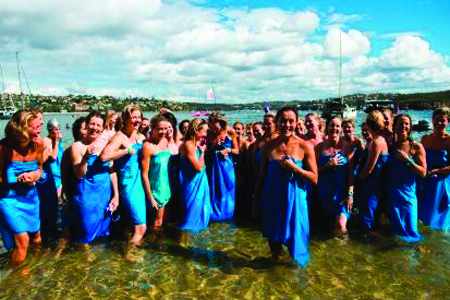 This was one that made the news, and we can totally understand why. We’ve all had a cheeky skinny dip before, so why not make a race out of it? The Sydney Skinny is a 900 metre swim and was held for the first time this past February. Its popularity exceeded expectations, with over 600 swimmers participating, paving the way for it to become an annual event in Sydney Harbour. If you’re even the little bit shy, throw caution to the wind and build up the confidence to take part in the world’s only registered naked swim competition next year. 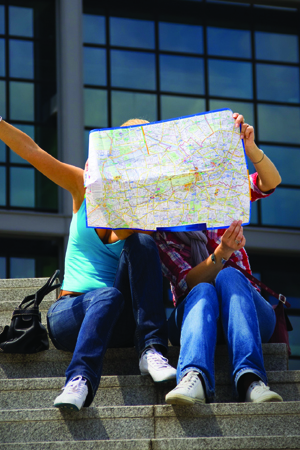 We’ve all dreamed about winning The Amazing Race. Well, The Great Tribal Chase in May (Sydney) will have you feeling like your dreams have finally come true. Not all races require stamina, speed, rock-hard abs and legs of steel for you to come out on top. The Great Tribal Chase is a race that tests just how clever we are, and as travellers, we often pride ourselves on the creative little ways we think of to get ourselves out of any situation. Each tribe participating in the race is armed with only a map and a mobile phone, left with just their superior skills and outstanding wit to solve the riddles and problems in just four hours. We all love a cheeky bit of trivia every now and again, so whether you’re teaming up against your mates or proving to all of Sydney that you’re the city’s greatest problem solver, it’s an event filled with laughs to be had. Donations for the chase go towards charity, so you’re all winners, really.