TNT speaks with ‘Jesus’: Aussie AJ explains why he believes he’s the messiah

The 50-year-old Aussie also purports his girlfriend, Mary Luck, is really repentant prostitute Mary Magdalene who the Bible says was present at Jesus’s crucifixion in the first century.

The media spotlight last week began to shine on Miller, who prefers to be called AJ, or ‘Yeshua ben Yosef’, said to be Jesus’s real name.

About a three-hour drive from Brisbane – dubbed Queensland’s ‘Bible Belt’ – is where the couple have set up the Divine Truth, holding seminars which attract up to 250 people.

“My name is Jesus and I’m serious,” AJ, a divorced father of two says. “Just a little over 2000 years ago, we arrived on the Earth for the first time.

Because of my personal desire and passion for god, as I grew, I recognised not only that I was the messiah foretold by ancient prophets, but also that I was in a process designed by god that all humans could follow, if they so desired.”

He adds: “We don’t believe we were Mary Magdalene or Jesus, but we believe we are [them]. We had an opportunity to return to the planet.”

It’s a bold claim, a controversial allegation which AJ seemingly believes to be fact – so where has he been for the past 2000 years? In the spirit world, of course. 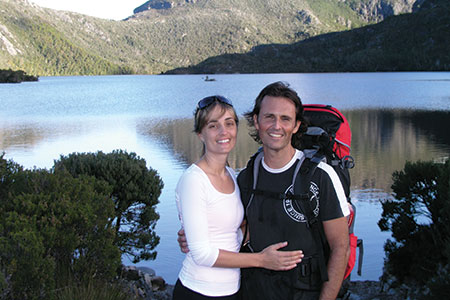 Controversial: AJ and Mary Luck, who claim they are Jesus and Mary Magdalene

“Mary and I had a life in the spirit world, and we took over 1900 years to reach the soul union state in the 22nd sphere or dimension – the only state from which re-incarnation can occur,” AJ says matter-of-factly.

“Once we reached that state, in 1935 on Earth, we decided to return and, after waiting for others to reach the same state of soul union in the spirit world, we began the process.”

AJ says that although he had memories such as “nails being driven into his feet” from the age of two, he dismissed these ‘flashbacks’ until he was older.

He says he was 42 before he could really accept who he was. A controversial revelation which reportedly led to his mother calling the authorities, asking for him to be sectioned into a mental health institute. However, tests revealed he was sane.

So what about that walking on water display? And turning wine into water? Showboating or miracle? Neither apparently – they didn’t happen, according to AJ. “All the stories involving what I would call ‘supernatural feats’ were not true,” he explains.

What about all the healing? Was that just to pad out the big book as well? No, that stuff was real. “All those stories involving cripples and blind people and other physical ailments including loss of limbs and all of those stories are all true,” AJ reveals.

The overall message in AJ’s seminars is how people can have a greater relationship with god. “We bring to you a knowledge of god’s laws of divine love,” he says. And it’s a message many move thousands of miles to hear.

George Hamel, for example, left California for Australia, leaving behind his wife and business. He says people have nothing to fear from AJ’s teachings.

“It’s natural that people form fears when they don’t know about something,” he says. “Anyone who has a chance to look into it isn’t going to find anything too upsetting.” 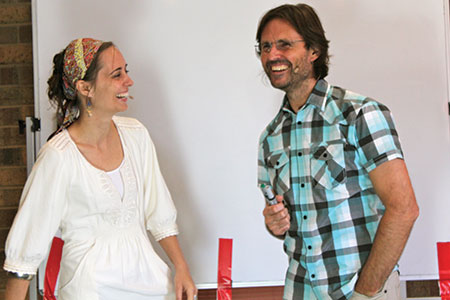 So how does Luli fund her lifestyle? The Divine Truth website explains: “Luli does not have any other source of income aside from your donations and gifts, and she provides every service free of charge. Your donations in this section go directly towards Luli’s living expenses. This allows Luli to do her voluntary work full-time.”

AJ and Mary say they have no other source of income except for donations, and seminars and workshops are free to attend.

They publish financial records on their website,  which for 2012 includes more than £126,000 in donations – from which they spent £22,000 on travelling, spreading their message, as well as £7500 making and editing DVDs so their views can go global.  “We believe the ‘Truth that sets you free’ should also be free of financial fees,” the website adds. 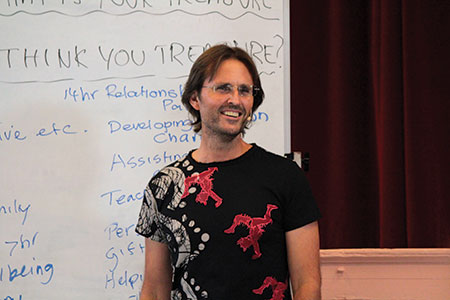 However, it’s not enough to convince everyone. Reverend David Millikan, who has studied cults for 30 years, was interviewed by Sky News about AJ, who he has met. Millikan believes people have a lot to lose by following the Divine Truth teachings.

He said: “The danger is you’ll be drawn closer and closer into his web to a point that you lose access to your social life, you spend all your money, you’ll have the curses of all your family ringing in your ears and you may well lose your relationship.”

And the website aj-miller.com claims AJ runs a cult, adding: “The best defence against organisations such as ‘Divine Truth’ is through education.”

Defiant to his critics, AJ tells Sky News: “There were lots of people in the first century who didn’t believe I was the messiah and were offended by what I said – and in fact I died at the hands of some of them. Unfortunately they didn’t learn love either and my suggestion is, even if you don’t believe I am Jesus, at least learn how to love.”

The Leaning Tower of Pisa

Give us a giggle: Late Night Gimp Fight