TNT’s Sun & Snow Travel Show has been hailed a huge success after more than 4,000 people flocked to the event last Saturday to pick up exclusive travel deals and bargains.

More than 40 exhibitors entertained and inspired visitors with their passion for travel at the show, which took place at the Ibis Hotel Earl’s Court.

Neighbours star and musician Sam Clark opened the show to a crowd of swooning fans, who posed for photographs with the star and queued up for autographs.

Entertainment was provided by Aussie songstress Brooke Supple who wowed crowds with her live acoustic act in the chill out area.

The travel seminars were also well attended, with top speakers including Lonely Planet’s Tom Hall who spoke about 10 European cities you’ve never thought of visiting – but should, and Trevor Herndon, from TEFL, who talked about teaching your way around the world.

“This was the biggest Sun and Snow Travel Show to date,” said TNT’s head of marketing and events Jim Zambrano. “We were so encouraged by the attendance and enthusiasm that we will be moving the show to a bigger premises next year.”

Travel Show exhibitors were full of praise. Daniell Saunders of On The Go Tours said: “We were very impressed; the numbers were fantastic and the clientele were great. On The Go did exceptionally well will bookings this year. We did a few things differently and have lots in store for the March show so that one’s going to be huge.”

Ben Hall from Contiki said: “It was a great show and an impressive venue. Books were good and we had lots of enquiries about winter skiing as well as summer 2011.”

The next TNT Travel Show will be held at Earl’s Court Exhibition Centre on March 19 – so get the date in your diaries!

If you were at the TNT Sun and Snow Travel Show 2010 then click here to see if you’re in our gallery. 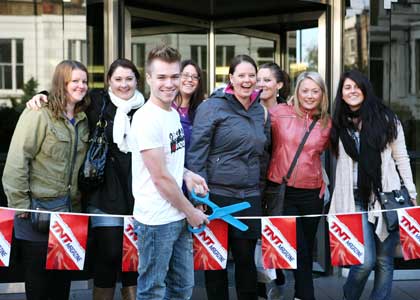 Single and ready to mingle? The best boroughs in London for finding romance

3 of the best cocktail bars in London: From a hidden basement bar to a Victorian-era drinking den