Today is the 60th anniverary of the first book published by Lem and the animated doodle features a character resembling him, who meets a giant robot.

Google users can use their cursor to interact with the robot, whose chest features an unreliable calculator.

A message within the doodle confirms the animation is to mark the ‘60th anniversary of Stanislaw Lem’s first book publication’ and adds the art work was inspired by illustrations from The Cyberiad – a series of short stories by the Polish author – created by Daniel Mroz.

The graphic itself does not click through to a search page like the majority of previous doodles but instead plays out the animation and interaction with the giant robot instead. 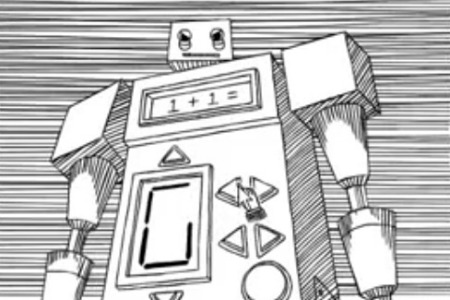 As a result, terms ‘Today’s Google’ and ‘Stanislaw Lem’ have both been trending heavily on Twitter as UK users try and find out more information about the striking doodle.

Lem produced a range of poems, essays and short stories during the late 1940s and 1950s but his first major work, Hospital of the Transfiguration, was only published in 1955 as the weight of ideological censorship began to lift following the death of the Joseph Stalin.

The Cyberiad, published in 1965, was a key work, although Solaris remains Lem’s best known work – first published in 1961, it was made into a film by the Russian director Andrei Tarkovsky in 1972 and by the US director Steven Soderbergh in 2002.

Xmas Giveaway: Win a new international GO-SIM card (incl. £34 airtime) with free calls in the U