Top of the flops

This insightful philosophy was being argued out along the M4 corridor as we pootled towards Wales’ green and pleasant nirvana of St. David’s. This historical gem sits on a galloping stretch of Pembrokeshire coastline and has the unique status of being a ‘city’, when in reality it’s a small picturesque village. This is due to the Queen (not just a pretty face on a stamp) bequeathing the village ‘city status’ due to its cathedral.

Confused? We were. Especially as we were shunning city life for stunning shorelines, eclectic wildlife and something called coasteering. 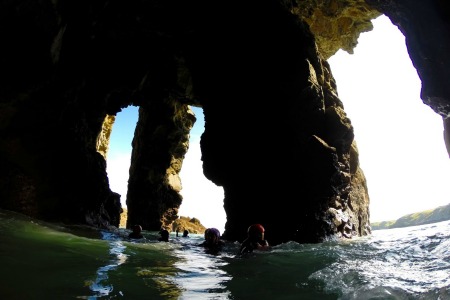 “Co-steering? What’s that, two people simultaneously driving a car?” someone grumbled as we gathered in a deserted car park at an ungodly hour. “No, jumping off massive stuff into the sea”, said Alan in a broad Welsh accent. Alan was our coasteering guide and seemed particularly enthusiastic this morning. Why? God only knows. It was raining, had more wind than a flatulent baboon and the sea looked as inviting as a peck on the head from the seagulls squawking above.

“Right, who’s up for this”? Bellowed Alan, impressively scaring off two seagulls in the process. Unfortunately without wings we couldn’t do the same. Three people immediately wandered off towards an ice cream van. “You boys are the rock and rollers”, said Alan to the rest of us. And if rock and roll means entering the beach via what appeared to be a sewage outlet pipe, then smash me over the head with a guitar.

As we inched along the murky slate cliff face, white water licked at our rapidly wrinkling toes and rogue waves slapped across our safety-helmeted heads. “Rad” screamed Alan. “Yeah, rad”, we mumbled. Having reached the end of the cliff face, we pondered our next move. Alan had it covered. We jump. “Off we go”, he bellowed disappearing into the frothy mass below, before re-emerging with a grin that threatened to swallow his safety helmet.

As adrenaline ate up fear, I leapt to a certain drowning before being encouraged to swim, “to that bloody big rock over there”. I duly obliged, swallowing half the sea in the process, before hoisting myself onto what was indeed a bloody big rock. Before you could say coasteering, Alan had already sprung back into the wet stuff.

After concluding that we weren’t about to drown every time we hit the waves, the whole experience became enjoyable, a kind of a sea-based version of the hokey cokey – in, out, in, out, shake your coasteering skills about.

By now those who’d capsized before getting into the ocean were green with envy, whilst we were brimming at the gills. “What next Al…?” one of the lads chirped up. Alan replied with a slow point to the heavens. We looked up, our eyes trained upon a dark cliff face that appeared to never stopped.

“The three tiered jump” announced Alan fervently, as if bones smashed to smithereens was something to get excited about. “The first jump is for technique….the second gets you used to heights…and the third is just RAD”. There it was again, that word. Rapidly becoming associated with ‘bad’.

Tier 1; and we all splashed down with the grace of hippos. Tier 2; evoked just enough distance between cliff ledge and water surface to conclude this was indeed quite a height. Tier 3; brought conversation; “Isn’t Wales lovely, “Did you know St. Davids is a city”?” such was its use as a delaying tactic.

Alan sensed the trepidation, “Come on lads, when you go over shout 1, 2, 3 I can see the sea”. We drew 1, 2, 3, out to a minute, before running until the ground gave way to fresh air, and just for a moment, a single moment, the spectacular Welsh coastline appeared in all its glory. Pretty much about the same moment the sea shot up my nostrils.

“Rock and Roll, eh boys?” said Al as we bobbed to the surface. As the exaltation and fear washed from our wetsuits into a tributary that wound back to the smallest city in Wales, Alan had a question for us. “Hey boys, do you know why Welsh wetsuits are lousy”? A collective shrug later and he answered with deadpan humour, “Because they’ve got Leeks”. What a city joke.