Tourists have been evacuated from Tunisia by travel agent Thomas Cook following unrest which the travel company decided could put visitors at risk. The move comes as Tunisia’s president, Zine El Abidine Ben Ali dismisses the government and plans to hold elections within six months.

There have been angry protests in Tunisia’s capital, Tunis, with demonstrators calling for the resignation of President Zine El Abidine Ben Ali who they accuse of corruption. 12 protesters have been killed as demonstrations became violent.

Many Tunisians are angry with the current government, which they blame for mass unemployment, branding Zine El Abidine Ben Ali corrupt and controlling. Today’s news that the government has been dissolved will be welcomed by many.

Tunisia is a popular tourist destination and there have been no reports of visitors getting caught up in the violence. Thomas Cook decided said its decision to evacuate 1,800 visitors was a purely precautionary measure.

“Although there has been no specific problems for our holidaymakers, their well-being is our primary concern so, as a precaution, we’ve taken the decision to bring them back to the UK as soon as we can,” a Thomas Cook spokesperson said.

On Thursday, Britain’s Foreign Office warned against all non-essential travel to Tunisia, citing violence in Tunis, Hammamet and Douze, all popular tourist destinations.

A spokesperson for the Foreign Office advised tourists already in Tunisia to keep an eye on the news. 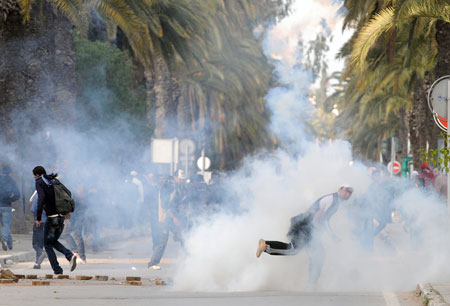 “The situation is unpredictable and there is the potential for violence to flare up, raising the risk of getting caught up in demonstrations,” the spokesperson said.

“British nationals in Tunisia should monitor the news or stay in touch with your tour operator.”

Angry demonstrators have been calling for his resignation.

London 2012: Londoners told to walk or cycle during Olympics

Blue boat and the Ocean

Chill out in Amsterdam