‘Old man search’, a Twitter account apparently set up by someone for their 81-year-old father, telling him it was a Google search is provoking much hilarity among the Twitterati, despite strong indications that it’s a hoax.

Apparently the ‘old man’ has innocently been searching the net for topics such as “fixing eye glasses tape” and, less innocently, “princess swimsuit breasts”.

Unknown to the hapless internet novice, his ‘searches’ are in fact tweets and are being read by nearly 18,000 Twitter followers.

Other topics troubling @oldmansearch include whether Shirley Tarnow is a widow and various ailments including cold toes and an ankle rash.

Perhaps most tragic and mysterious is Old Man Search’s enquiry into “how to erase or forget a memory”. 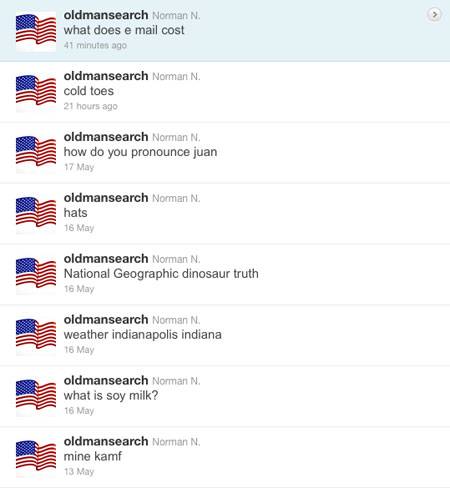 Here’s what @oldmansearch has been tweeting today.

Although many have been LOLing over Old Man Search, there are some who questions its veracity.

“Does he not get fed up when his ‘searches’ return no results?” asks andybarnes102 on Twitter.

While teenageSatan666 tweets: “don’t you think he would ask ‘why isn’t this working?”

Indeed. Slightly too good to be true we think.

Sydney The Rocks at night time