UK travel: Get high with paramotoring in Kent

I may not be too keen on the over-the-trouser Y-fronts and skintight spandex, but if there’s one thing I’ve always envied about Superman, it’s the way he can fly like an easily mistaken bird.

So it’s no surprise that, in pursuit of the airborne buzz, I now find myself plummeting 30ft towards the ground, flailing to control my parachute and avoid crashing into the giant motor-powered fan beneath me. Welcome to Paramotoring 101.

Take parascending (float through the air using a parachute and thermals), add a giant motorised and caged propeller on your back, and ta-da!

You have an airborne sport that can allow take-off even when you have no wind, and a full tank of gas to take you further – and at added bird-splatting speed (the motor I’m training with is a ‘smaller’ model, at a not insubstantial 80ccs).

The birth of paramotoring can be traced back to the SAS; variations on the ‘giant fan-propelled parachute’ design ushered in the bonkers sport in the early Nineties.

Since then, pioneers have attempted flights from the UK to Timbuktu, and even Bear Grylls gave it a shot back in 2007, with a televised attempt to paramotor at the height of Everest. 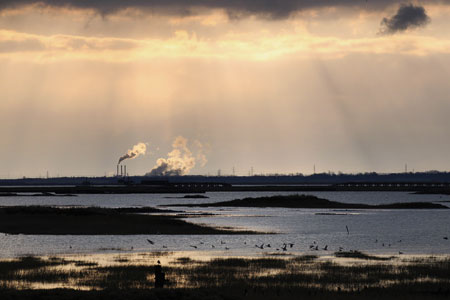 As I sign away my life, I ask my instructor Jon if it’s totally legal. “Completely,” he assures me. “There are laws in place to ensure you don’t hit planes and such, but as it’s a deregulated sport, there are few cast-iron, law-breaking rules.”

Yep, paramotoring is one of the few airborne sports that has no official licence – anyone can do it.

Taking that to mean it’s easy, I confidently strut after Jon as we head out on to the rolling green hills of the Kentish countryside, in the idyllic rural hideyhole of Hoath near Herne Bay.

The first day of training is primarily theory, ensuring you’re able to get to grips with the basics of parascending (you have to learn to walk/ parascend before you can run/ paramotor).

During the next 90 minutes, I learn the importance of wind strength and direction, practice the PLF (parachute landing fail), and brush up on the basics of the theory of flight (get up in the air, try not to plummet).

As we prepare for my first take-off technique, Jon waxes lyrical about the appeal of the sport: “It’s the closest to flying you’ll ever get. The British countryside doesn’t lend itself to parascending, but with a powered propellent that can be kickstarted at the touch of a button, you can get up in the air anytime.

Once, I remember flying around and noticing that there was a 747 beneath me. Sure, it was coming into land, but that was a bit nuts.” 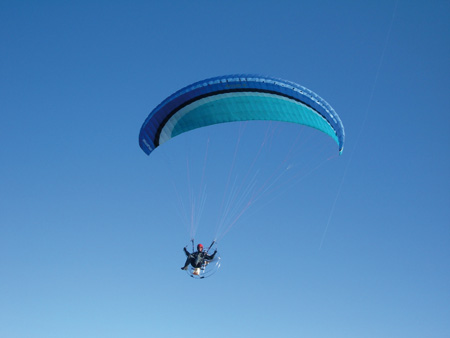 It makes my feeble attempts to simply get off the ground feel all the more pathetic. I don’t often like to admit I can’t get it up, but as I stand on the slope of a hillside trying my first ever launch, I realise it’s undoubtedly harder than it looks. However, practice eventually makes, well, passable.

In between parachute-tugged impromptu cartwheels and roley poleys, I enjoy bursts of floating above the ground – at one point quite unconsciously screaming “wahoo!” when I manage to float 30ft in the air.

We move on to front-facing launches, and spend the next couple of hours perfecting ‘top to bottom’ runs (a gentle run at the top, a glide down, and back again), before progressing on to ‘bunny hops’ (run, fly, land and repeat).

The theory is that after two days’ training, you’ll get to cap off your intro course with a go on the Tandem Paramotor. Like skydiving, you’re in a double harness that allows you to experience the buzz with none of the responsibility.

Alas, the weather’s against me this time, but Jon slaps the paramotor on my back, and lets me feel the force and pull of the motor spinning at top speed.

With the motor whirring behind me, I feel my feet start to lift off the ground. I may not be flying through the sky like Superman just yet, but I’ve finally found something that makes me feel like I could.

Paramotoring lessons from £110 per day with Flyhigh Sky Sports 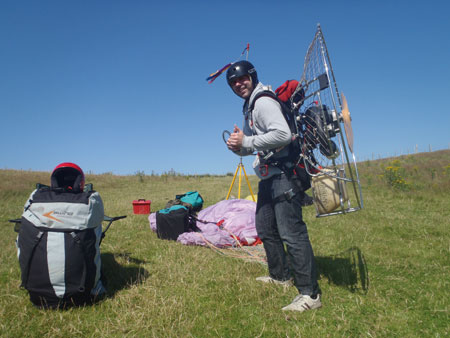 Trains run from London Victoria to Herne Bay, Kent every 30 minutes. Return tickets from £25.90 when booked in advance.
http://www.southeasternrailway.co.uk

For not only the area’s best Indian, but possibly the county’s, don’t miss out on Shad Restaurant. Mains from £6.

Find a warm welcome and maritime feel, right on the coastline, at Victorian-era The Divers Arms. Look out for the old brass diving helmet. Pints from £2.50.

For those looking for a swankier approach to B&B-ing, try The Priory B&B. Rooms come with free wifi and Sky TV as standard. Rooms from £65pn.

Revealed: Where expats love to work abroad in 2015