More rain and low temperatures are forecast for the rest of this week in the UK, dashing hopes of a warm weather or a BBQ summer.

The wet weekend brought two weeks' rainfall in one day to parts of Britain.

A string of events were blighted by the rain and bad weather, including the 140th Open Championship at Royal St George's, Sandwich, and Latitude Music Festival in Henham Park, Suffolk. 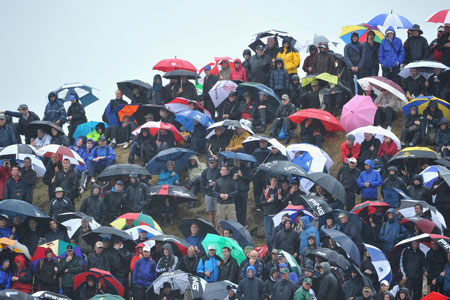 Torrential rain during the third round of The 140th Open Championship at Royal St George's on July 16 in Sandwich, England.

The Met Office warned Scotland, north Wales, the north of England and the South East to be prepared for more heavy downpours last night in a miserable summer forecast.

Perth, Scotland, had to deal with flooding this weekend.

Spadeadam in Cumbria was the wettest place in the UK last weekend, enduring 50.4mm of rain in the 24 hours from noon on Saturday until noon on Sunday.

Strathallan, in Scotland, was the second wettest place, getting 41.8mm of rain in the same period.

Met Office forecaster Eleanor Compton told the Daily Mail: "What we have got is low pressure and it is very slow moving. It is just north of the UK and by Monday it’s going to be just off eastern Scotland.

"The whole of the UK has been experiencing very unsettled conditions, and these look set to continue into the week.

"We can expect to see bands of rain and some heavy showers developing. There will be sunshine for some areas, but others will have persistent rain and quite a brisk wind, especially the western side of the UK and across the south of England.

"On Tuesday we’ll still be under the influence of this area of low pressure. It’ ll be very cloudy and we’ll see further showers, although they’ll probably not be as bad as Monday."

She added;  “As we go into the middle of the week, on Wednesday there will still be low pressure to the north east of the UK, so still further clouds and rain at times,

"Temperatures generally we are thinking in the mid to high teens at best. We may just get 20C (68F) in some of the longer sunny spells, which is just about the average temperature for July.

"As we go towards the end of the week the weather looks like it’s going to remain unsettled.

"There is an indication that the weather could improve at the beginning of the next week, but it’s still too early to say.”

Did you get caught in the rain this weekend?