Video: Did American rower Henrick Rummel get a bit too excited receiving his bronze medal?

The Men’s Four rower shifted awkwardly at the podium to receive his medal with his teammates, bearing a suspicious bulge below the belt.  After receiving his medal, the athlete looks down, grimaces, and then appears to laugh it off.

Rummel exchanges glances with teammate Glenn Ochal next to him, who looks down as they shrug at each other. Ochal looks visibly uncomfortable afterwards, avoiding eye contact for the rest of the medal ceremony.

“The Boner should have gotten The Gold Medal!” said one commenter on the YouTube video. 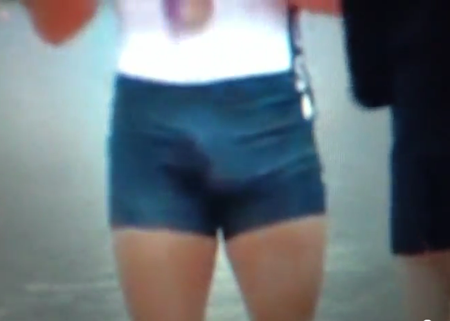 Rummel had just won a bronze medal in the supposedly coxless race with teammates Glenn Ochal, Charles Cole and Scott Gault at the Eton Dorney Rowing Complex. The 24-year-old and his team came in third on the 8th and final day of rowing after the silver medal Australian team and the gold medal Team GB.

But, we shouldn’t be too hard on this guy, he is an Olympic champion, after all!