Galloway left a small debate at a lecture hall in Oxford University’s Christ Church college, after discovering his opponent was of Israeli heritage, saying “I don’t debate with Israelis, I’ve been misled, sorry.”

“I don’t recognise Israel and I don’t debate with Israelis.” the Respect MP for Bradford West told the students as he walked out. 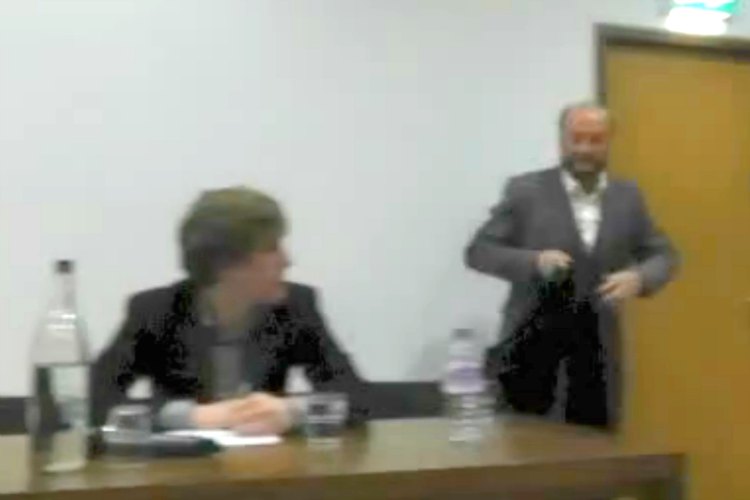 I’ll get my coat – Galloway walks out

“I am appalled that an MP would storm out of a debate with me for no reason other than my heritage.” said student debater Eylon Aslan-Levy.

“To refuse to talk to someone just because of their nationality is pure racism, and totally unacceptable for a member of parliament.”

“At no point during my email exchange with Mr Galloway’s secretary was Eylon’s nationality ever brought up or mentioned. Nor do I expect to have to tell the speaker what his opponent’s nationality is.” debate organiser Mahmood Naji told Cherwell.org, the independent student newspaper of Oxford University.

Galloway responded following his walkout with a tweet that read “Israel: simple, No recognition No normalisation. Just Boycott, divestment, sanctions. Like Apartheid SA. No Apartheid in Israel-Palestine.”

Galloway also posted a statement on his Facebook page: “I refused this evening at Oxford University to debate with an Israeli, a supporter of the Apartheid state of Israel.”

“The reason is simple; No recognition, No normalisation. Just Boycott, divestment and sanctions, until the Apartheid state is defeated. I never debate with Israelis nor speak to their media. If they want to speak about Palestine – the address is the PLO.”

Aslan-Levy explained to The Guardian that he wanted to call for a peace treaty solution during the discussion “As opposition speaker, my case was not that Israel should remain in the West Bank, but that such a withdrawal should not be immediate – ie unilateral – but in the context of a negotiated peace treaty, which would recognise both Israeli and Palestinian states.”

Dom Joly: Welcome ?to Wherever I am, Bloomsbury Theatre