Visit Egypt: Is it safe for tourists to return?

There’s a man cradling a large gun, sitting directly in front of me. It’s also 2am and I’m on a bus in the middle of the desert. I’d be lying if I said I didn’t feel a little uneasy but, luckily, this guy isn’t a threat – he’s a policeman, here to protect me and my tour group from hijackers and terrorists. But I’m still not sleeping tonight.

The casual observer may ask what any sane person is doing in the middle of a desert in the small hours, when a guy with a gun is necessary to protect you. Well, the likelihood of anything actually happening is pretty small, but having an armed escort does feel pretty glamorous. I’m on my way to Abu Simbel – two massive temples carved into rock on the banks of Lake Nasser, near the Sudan border. I left Aswan, Egypt’s most southern city, in the middle of the night to catch the sunrise, which I’m told is going to be worth the 1am wake-up call.

To think that the requirement for travellers to be accompanied by an armed police escort is a new one, brought in since the revolution started, would be wrong – it was common practice before, as it is in other African and Middle Eastern countries. But that’s not to say things in Egypt aren’t different since the 2010 uprising that led to the toppling of President Hosni Mubarak and the National Democratic Party. Visiting the country is best done by following the ‘safety in numbers’ philosophy and travelling with a tour group – especially since two American and three Korean tourists were kidnapped by armed tribesmen attempting to assert their power in the Sinai peninsula at the beginning of this month. 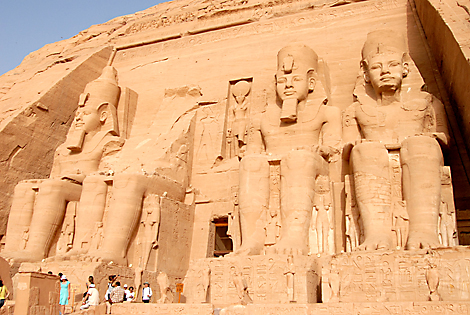 But despite its problems, Egypt is generally safe for travel, providing you stay away from demonstrations and protests. And, on the flipside, it’s a great time to visit: tourists aren’t exactly arriving in droves, hotels are cheap, and the Ancient Egyptian sites are empty – so no queues.

Back at Abu Simbel, the stone-cut temple is deserted as I arrive. The four figures of Rameses II loom out of the darkness as I enter the temple through a comparatively tiny door between their feet. Inside, I wander around, marvelling at the walls of colourful hieroglyphics and images that tell stories about the pharaoh’s reign over Ancient Egypt. When I emerge, the sun shoots
above the hills across the lake, creating
a spectacular scene.

Of all Egypt’s temples and historic sites, I find this one the most epic. It might be controversial, but I’m more impressed by this than the Pyramids, thanks to the vibrant inner-wall inscriptions, which the Great Pyramid doesn’t have. It’s also because of the sunrise – with peach hues bouncing off the stone, Abu Simbel is peaceful and beautiful. It’s easy to see why, twice a year – during its festivals in February and October – people come to see the new day’s sun pierce the main temple corridor and illuminate the inside. Rameses II had the tribute built so it would happen once on the anniversary of his ascension to the throne and again on his birthday (although, as the temple had to be moved to avoid flooding when Aswan’s High Dam was built across the Nile, it’s now a day later).

The Pyramids are still well worth a visit, though – the feats of ancient architecture are one of the world’s Seven Wonders for a reason. These enormous stone constructions rising from the desert on the edge of Cairo, guarded by the mighty Sphinx, are big and baffling. And when I arrive in peak season, the usually swarming tourist hotspot is dead. With less than 100 visitors (my tour group included), we have the Pyramids almost to ourselves: no queues, and no jostling to see them. 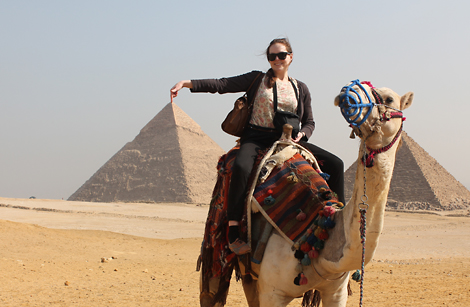 I am, however, stalked by the street-hawkers, or ‘hasslers’ (as my guide, Ahlam, calls them) selling postcards and other tourist junk. They shout “Michael Jordan”, “Shakira” and my personal favourite, “Spice Girl”, to get attention and flatter the group into making purchases. It’s not long before I encounter the old chestnut – “How many camels … ?”

It works on some, but I find it too intense and perfect a ‘look at the floor’ technique that means I’m quickly left alone. Others opt for sticking their fingers in their ears and shouting “la, la, la”, which conveniently translates to “no, no, no”.

A guy from my group foolishly engages in conversation and soon has his picture taken with a camel, which he is then led away on. He returns 10 minutes later with his wallet EGP200 (£20) lighter. On the desert side of the Pyramids, camel rides are EGP60 (£6), and the rest of the group jumps on smugly for an uncomfortable but awesome view of the Giza landscape.

Egypt has so many breathtaking ancient historical sites, I still feel slightly guilty for picking a favourite. The Philae Temple, built on an island in Lake Nasser near Aswan, is dedicated to Isis – the goddess of magic and life – and is also an awesome sight, as its clean lines and smooth intact columns reflect in the water.

And further north, the Temple of Karnak in Luxor’s USP is its size: it’s the biggest ancient religious site in the world. Obelisks and altars surround a sacred lake and you can lose yourself in a room of wide, imposing columns.

When it’s time for a felucca cruise, I’m ready to drink beer and do sweet FA for two days, while the wind pushes the craft up the Nile. Ahlam rounds up the group to lay down some ground rules. We can do anything we want, but the crew are pretty conservative. So, he says – looking at the couple who are on their honeymoon – “no canoodling on the felucca”. Fair play.
I crack open a beer and kick back as the boat zig-zags up the waterway. Lying on the deck with booze and book in hand, as music plays through a retro boom box, I forget anything else exists for the rest of the day. 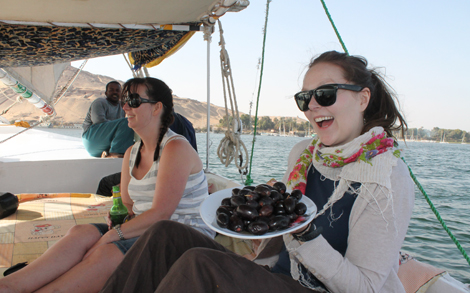 Before it gets dark, the skipper moors for dinner – flatbreads, potatoes, soups and stews. Tonight, the group stops off at the Nubian-run ‘Adam House’, where travellers can enjoy tea and sheesha on comfy cushions, and get henna tattoos for 2EGP (20p) a pop. When the sheesha burns out, we all head back to the felucca and unravel our sleeping bags for a night under the stars.
I’d been apprehensive about camping out on a boat deck, a couple of feet above the murky river with just sheets for walls (especially knowing that mozzies like water). But I’m so chilled out from the day’s lounging, I’m asleep in seconds.
I wake to the sunrise and spend the next day exactly the same way as the previous one, with an added dip in the Nile’s chilly February water for the brave ones in our group.

That evening, the group stops off at our own private Nile beach, and, after dinner, the crew light a bonfire before cracking out guitars and drums and playing some traditional Nubian tunes. They get us all dancing, and we sing songs from home – I Still Call Australia Home for the Aussies; Spice Girls’ Wannabe and Oasis’ Wonderwall for the Brits.
The morning brings a drive north to Luxor. As amazing as the felucca experience was, the lack of bathrooms makes the five-star St George Hotel a happy sight.
From here, it’s a visit to the Valley of the Kings – in the desert outside Luxor – where pharaohs such as Tutankhamun were buried in rock-cut tombs.

Cairo-bound again that evening, I’m further reminded of the unrest. My night train has to stop for four hours because protesters are on the line, voicing their anger at food and fuel shortages. And, two days after the football violence in Port Said that left at least 74 people dead, I’m not sure what to expect in Cairo during the country’s three days of mourning.

But the city is as hectic as always. Bricks fall off lorries, donkeys pull carts piled high with vegetables, camels are parked up next to vehicles or tied up in the back of trucks. Beeping cars weave dangerously close to each other on highways with unmarked lanes. 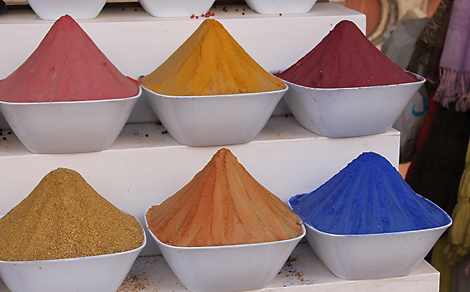 It’s straight to the Egyptian Museum, which is overlooked by deserted hotels and the burnt-out National Democratic Party headquarters. I’m just next to Tahrir Square, but I’m told it’s too dangerous to go and have a look. Thankfully, the museum is enough of a distraction. Inside, I see the glistening contents of Tutankhamun’s tomb at the Valley of the Kings – his gold mask, jewellery and sarcophagus.

Heading back to the airport the next day, I catch another glimpse of Egyptian politics – my guide points out a police convoy of about 30 cars and vans taking Mubarak and his cronies from court to prison. The uncertain feeling is back, but it’s been worth it to see Egypt’s rich heritage – with no other tourists getting in the way of my pictures.