Visiting Tokyo: Getting Around the City

The city of Tokyo has the third largest population in the world. The first two positions belong to Beijing and New Delhi. Its surface covers over 2,188 square kilometers, while the population of this thriving city numbers over 13.62 million people. Ever since the Summer Olympic Games were held in Tokyo in 1964, the city has become an increasingly popular destination. Tokyo’s infrastructure and transportation system have developed significantly over the last years, making it easier and faster for commuters and visitors to reach any part of it.

So, how do you get around using the Tokyo Metro, the Yamanote line, Narita Express, and the Japan Rail Pass. 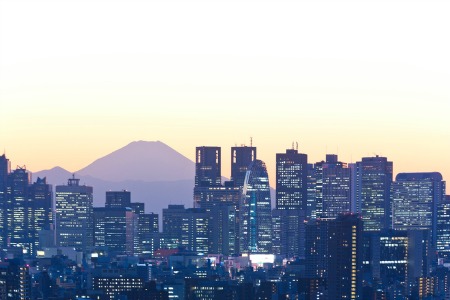 Narita Airport is located outside of Tokyo, in the Narita Prefecture. You can reach Tokyo Station from the airport by taking the Narita Express. It will take you approximately 1 hour to reach the city centre. A one-way ticket on the Narita Express (N’EX) costs 3,190 yen. However, Japan Rail Pass holders can take the N’EX free of charge. The Narita Airport transfer is fully included in the JR services.

There are 9 metro lines in Tokyo as follows:

Ticket purchasing tip: Make sure to have cash on you. Some ticket vending machines don’t accept cards.

If you plan to make more than a few trips on the Tokyo Metro, it is recommended to buy a 24-hour Ticket, valid for 24 consecutive hours from the first use of the ticket. The price for adults (12+ years) is 600 yen. Childrens price (ages 6 through 12) is 300 yen. With a 24-hour ticket, you can travel an unlimited number of times on the Tokyo Metro during the validity period of the ticket. 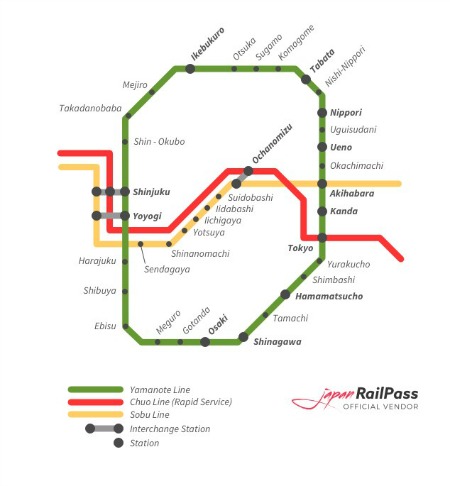 The Yamanote line is the busiest Tokyo metro line, stopping at the most central and tourist attractive points of the city. The following are some of the most popular stations on the Yamanote line:

The Yamanote Line provides direct access to some of the most prominent places in Tokyo such as the Shibuya Crossing, the Ueno Zoo, Ueno Park, the Shinjuku Gyoen National Garden and much more.

A single ride on the Yamanote Line will vary in cost, depending on your departure and arrival stations. You can purchase your ticket from any metro station by following the same ticket purchase guide, provided above.

However, if you hold a Japan Rail Pass, you won’t be charged when taking the Yamanote Line. The services of the circular Tokyo metro line are fully included in the JR Pass.

Japan Rail Pass: what is it?

Japan Rail Pass is a multi-use discounted ticket, valid for travel on all national Japan Rail trains, as well as JR buses and special ferry services. You can select from 7, 14 or 21 validity days. As mentioned above, the JR Pass also covers the cost of Narita Express and the Yamanote Line. Foreign nationals who visit Japan for touristic purposes for less than 90 consecutive days are eligible to purchase the pass. The Japan Rail Pass is not sold in Japan. The services are provided by authorised vendors such as www.jrailpass.com.

After ordering the pass online, you will receive an Exchange Order (a JR voucher), which you will need to activate once in Japan at a Japan Rail Pass Exchange Office. Once you select the activation date of your past, it cannot be changed. Make sure to purchase the pass no sooner than 3 months before your intended departure day to Japan.

Video: Gok Wan offends Australians after referring to boobs as bangers in ad for Target