Roland Bunce is topping the Next top model online competition and is on track to win £2,000 of vouchers as well as a modelling contract. Despite the fact that chubby Bunce is not standard model material, he is currently in number one position in high-street shop Next’s model competition.

It’s doubtful whether ‘Roland Bunce’ is the man’s real name, but on Next’s website he lists himself as 24 and from Northern Ireland.

Bunce apparently entered himself into the model competition and his picture smiles triumphantly amid the usual line-up of pretty boys and girls. 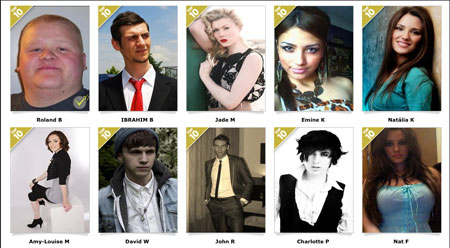 Roland Bunce alongside the other model hopefuls on the Next website.

The ginger-haired Irishman’s modelling dreams would probably have come to nothing if a few people with a sense of humour hadn’t decided to give him a boost.

Bunce’s popularity surged when more than 10,000 ‘liked’ him on Facebook, and he was the most talked about person on Reddit.

“A vote for Roland is a vote for reality,” shouts the slogan backing Bunce to win the compettion.

On his Facebook fan page, Roland thanked his fans, writing: “Thanks for all for the support and thanks to the person who started the group. I’m overwhelmed.”

“Vote for Roland Bunce. He’s just an honest, chubby fella competing against those who value looks over everything else ,” said theinsider9.

“I bet there are some very unhappy marketing peeps over @Next LOL! Wonder if they’ll find a way to spin it!” tweeted nickyockney.

However others have pointed out the fact that, funny though the hijacking of Next’s model competition is – it’s even funnier that the world appears to be waiting for the real Roland Bunce to step forward.

“The funniest thing about this Next model voting hijack thing is the wider media reporting it as if Roland Bunce is a real person,” points out sebpatrick.

Meanwhile, Next competition organisers are apparently failing to see the funny side and declined to comment on Roland leading the competition.

However, they said they had no reason to suspect Roland is not a genuine entrant.

A Next spokeswoman said: “It’s a public vote. People can vote for whoever they like without restriction. The competition is open to any age, height, size or look.”

The public vote will decide the top 250 models and closes on June 30.

A panel of modelling industry experts will shortlist 50 entrants to attend a ‘model boot camp’ from which two final winners will be chosen.

You can vote for Roland Bunce here: next.co.uk/model-competition-2011

Gary Barlow and Kate Winslet awarded honours by the Queen

Foreign Students: How to plan your travel around UK