Weekend in Budapest: From the Szechenyi Chain Bridge and Buda Castle to soaking in the baths and spa

11:00 Once you’re fuelled up, wander over the iconic Széchenyi Chain Bridge, across the River Danube between Buda and Pest, the western and eastern sides of Budapest. The bridge dates back to 1849.

12:00 Take the funicular (a short but scenic rail journey) from Clark Ádám tér at the Buda end of the Chain Bridge to the Castle District, a Unesco site.

This area was established around 1265, and there’s plenty to explore. It’s small enough to get round on foot, so take in the Vienna Gate, once a medieval market, the baroque Matthias Church and the horseback statue of András Hadik, a general in the Hussar
(a branch of cavalry that began in Hungary).

Check out the horse’s shiny yellow testicles, which are a different colour to the rest of the statue. Apparently students polish them for luck on the morning of their exams.

13:00 Buda Castle, also known as the Royal Palace, is the main building in the district, and is home to the Hungarian National Gallery (entry £3.40, mng.hu), where you can gaze at stunning 20th-century paintings, Renaissance stone carvings and modern artwork on display.

14:00 For a cheap and cheerful lunch, Menza (mains from £5, menzaetterem.hu) is a must. It’s full of trendy young professionals grabbing a quick bite. Go large and order one of their popular burgers – you won’t be disappointed. 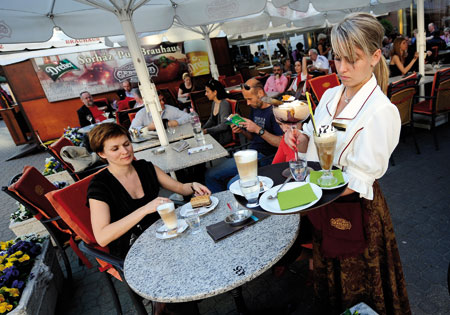 More than a century old, the grand venue – built to rival Les Halles in Paris and Covent Garden in London – boasts all sorts of Hungarian delicacies, including strings of garlic, salamis, pastries and wines.

Look out for the themed food events, as well as the cooking demonstrations throughout the day.

20:00 Before a night on the town, treat yourself to dinner at Spoon (mains from £11, spooncafe.hu), a fusion restaurant which floats on the river.

This is an ultra-romantic place to eat and has jaw-dropping views over the Danube, to the Castle District and the Chain Bridge, which lights up at night. The food is spot-on – definitely worth splurging.

23:00 Now make your way to Corvintetö (drinks from £3, corvinteto.hu/en), where you’ll find a hip crowd dancing until the wee hours to drum ‘n’ bass.

This is a cool venue – the top floor of a department store converted into a nightclub. You won’t have long to wait at the impressive 30m-long bar, so grab a beer then head to the rooftop terrace to boogie the night away under the stars. 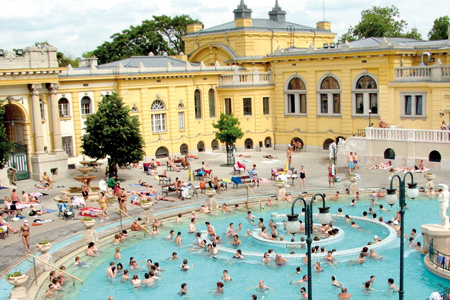 10:00 After a well-deserved lie in, amble to Gerlóczy Café for a hearty hangover-preventing brekky, which is served until noon.

13:00 You’ll need to refuel, so stop at Új Sípos Halászkert (mains £5.50, ujsipos.hu) for a bowl of fish soup for lunch. Dine alfresco and while away an hour people-watching.

14:30 Budapest is famous for its Turkish baths, so don’t leave without spending a few hours lazing in them.

The largest complex is the Széchenyi Bath And Spa (weekend ticket £11.25), which dates back to 1881 and has 10 indoor and four outdoor thermal baths.

17:00 With your energy levels topped up, stroll to the Palace Of Arts (mupa.hu/en), near Lágymányosi Bridge, to check out the modern art museum.

20:00 For traditional Hungarian food, we recommend dining at the popular Karpatia Restaurant (mains from £10).

A gypsy band provides the soundtrack while you chow down on tasty dishes such as paprika chicken and goulash.

22:00 Finish off the night by sampling Hungary’s national tipple. The lively A38 bar (drinks from £2, a38.hu/en) serves Pálinka, a fruit brandy that goes down a treat.

Try the apricot, strawberry and raspberry flavours which will gear you up for another night on the tiles.

Return flights from London to Budapest cost from £130 with easyJet  |  budapest.com

Last video from epic traveller and dancer ‘Where the Hell is Matt?’ emerges online