Weekender: Pula – the perfect way to spend a weekend in this jewel of the Adriatic

10:00 | Croatia is the sun-seekers’ paradise of eastern Europe, most famous for beaches, bars and bygone times. Serving up all this and more is Pula, a seaside city dotted with archaic quirks on the southern coast of the Istria peninsula. Make the most of your first day by heading off early to the City Farmers’ Market (on the corner of Smareglina Ulica and Narodni Trg) for some fresh bread and fruit. Then wander over to Giardini Square (on the corner of Giardini and Zagrebacka Uli) to sit on the grass and enjoy your purchases while indulging in a little people-watching.

11:00 | Head to the Pula Arena (Flavijevska City Centre; tel. 00 385 52 219 028; entrance £2.15), a large Roman amphitheatre in the centre of the city, very similar to the colosseum in Rome, and the Pula’s most famous landmark. Built in the first century AD, it held 20,000 spectators in its heyday, who came to see bloody gladiatorial battles.

14:00 |  Stuffed full of Croatian cuisine? Walk it off along the seafront back towards the Twin Gates (corner of Carrarina Ulica and Ulica Castropola). In medieval times, the city was surrounded by walls and these gates were the main entrances into the city. They were built between the second and third centuries, but still look mighty impressive today.

15:00 | By now you’ll be feeling the heat. Meander through the streets towards the air-conditioned Archaeological Museum of Istria (ami-pula.hr/en/home; entrance £2.15) and ogle objects from prehistoric, Roman and medieval periods.

17:00 |  Pula’s most recently opened tourist attraction is the Underground Galleries (entrance £1.60), next door to the Archaeological Museum. These subterranean tunnels were dug at the behest of the Austro-Hungarian monarchy for strategic purposes during the Great War. The temperature never rises above 20°C, which may sound hot to a Londoner, but makes a cool change to the scorching Croatian sun outside.

21:00 |  Most bars in Pula close by midnight. But there are a number of nightspots just outside Pula itself, which stay open until the early hours. Club Ulanjik (clubuljanik.hr; free entry; drinks for under £2) has a huge outdoor courtyard with plenty of seating, as well as a number of indoor bars and dancefloors for a good old boogie. The club is open until 6am, but when you feel ready to drag yourself away, there are cheap beds at Riva Hostel (Riva 2, 52100; tel. 00 385 95 827 0243; dorm beds from about £10.50pn), in the heart of Pula’s historic town and close to the waterfront. 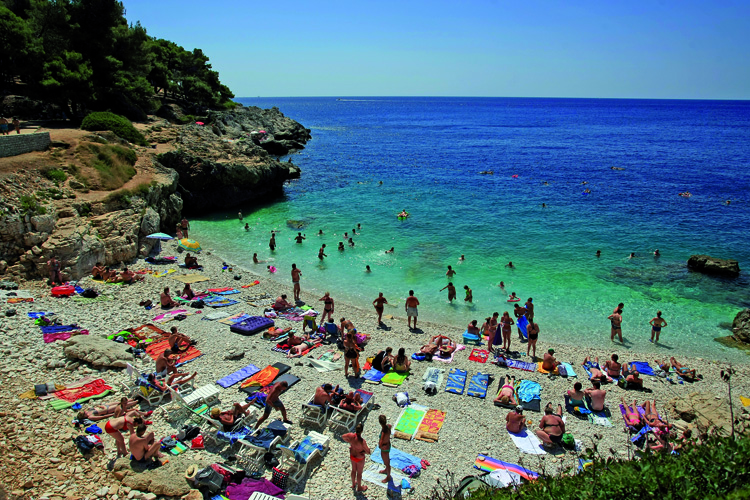 11:00 | Pop across the square to the Triumphal Arch of the Sergi (Ulica Serguevaca). Also known as the ‘Golden Gate’ because it used to be covered in gold detailing, it was built in 29BC in honour of the powerful Sergi family. Street theatre is often performed on the square opposite, so relax and watch some dancing and juggling in the sunshine.

13:00 | Time for lunch. Sample the fruits of Pula’s booming fishing industry at Farabuto (farabuto.hr; mains from £5). Then get stuck back in to the culture. Visit the Temple of Augustus (corner of Riva and Flaciusova Ulica; entrance fee 43p), once dedicated to Roman gods before becoming by turns a church, a granary and a museum. The temple was originally constructed between 2BC and AD14, but got completely destroyed in 1944 by a bomb and rebuilt again in 1947.

16:00 | If you’re a fan of architecture, you’ll adore the Church and Monastery of St Francis (west end of Sergijevaca; entrance fee 70p). A beautiful church with Gothic ornaments, it’s dedicated to St Francis of Assisi and was built in the 14th century.

18:00 | Treat yourself to the most expensive thing on the menu at Konoba Istriana Pomer (konoba-istriana.com): lamb and potatoes for £10.40. Really pushing the boat out.

21:00 | End your trip in style with a fancy cocktail at Pietas Julia (pietasjulia.com; free entry). Located right next to the sea, this huge bar can accommodate up to 500 people, so drag along everyone you’ve met on your travels and dance the night away.

From Dusky till Dawn – Kaikoura