Wellington city break: Why New Zealand’s capital is the San Francisco of the south

But there’s a fourth you should add to that list – the Wellington that’s both the much-underrated Kiwi capital and also New Zealand’s most liveable city.

Quirky and unique, Welly is immediately likeable. Better yet, it’s also blessed with the rare ability to keep growing on you, visit after visit. It effortlessly exudes a distinctive sense of cool reminiscent of Melbourne, while being set against a stunning natural harbour that would give catwalk-quality Sydney a run for its money.

Kind of like a small San Francisco for the Southern Hemisphere, Wellington has both the looks and the brains. Plus, thanks to living somewhat in the shadow of its much bigger, northern nemesis Auckland, the seat of the Kiwi government lacks any of the big city pretences that so often beset capital cities.

Indeed, being home to fewer than 400,000 people, meaning it’s less than a third of the size of Auckland, many people outside of New Zealand aren’t even aware that Wellington is the capital. And, in fact, that hasn’t always been the case. While legend has it that Maori forefather Kupe was the first to discover the area back in the 10th century, it was not until 1840 that the first European settlers washed up and plonked a flag in the sand. At that stage, it was Auckland which was the colony’s capital.

However, fearing the country’s southern gold fields might fancy their chances at going it alone, the capital was moved to the opposite end of North Island in 1865, allowing the powers that be to keep a closer eye on any potential trouble-makers. The capital has remained there ever since. 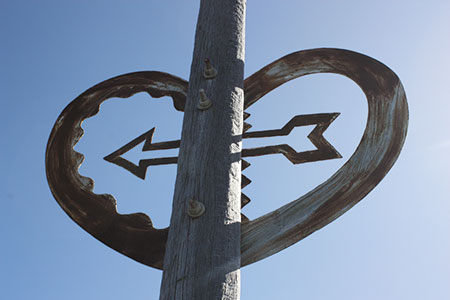 Despite still being relatively small, Wellington’s cultural and culinary riches betray its true position. Most newcomers will start their discovery with a walk along Wellington’s compact waterfront area, between the railway station and Oriental Bay. It’s here, nestled amongst the wharfs and lively restaurants that you will find the superb (and free) Te Papa museum.

Meaning ‘Our Place’, the Te Papa is New Zealand’s national museum and is without rival in the Land of the Long White Cloud. An easy place to lose at least a day, it is crammed with fascinating and creatively displayed artefacts, with great insights into New Zealand’s geological history, Maori culture and all else Kiwi up to the present day. There’s even a colossal squid.

Back out on the street, it’s hard not to pick up on what a distinctive feel Wellington has. It’s one of the few cities in the world where, without the aid of any Big Ben-type landmarks, you could be zapped down in the middle of town, have your blindfold removed and pretty quickly guess where you are. 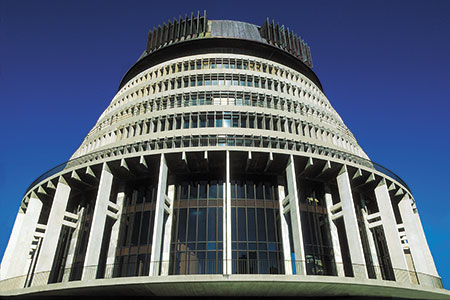 Steel and glass rise from the Tasman Strait waters, rowers scull through shimmering, pristine waterways while stingrays swim underneath, and a simply ridiculous number of theatres, restaurants, bars and cafés abound on every side. Serious politicians live side-by-side with bohemians. Indeed, every third person looks like they’re the bass player out of some-yet-to-be-discovered band, only less glum. It’s a place where everybody seems to enjoy living.

But don’t take our word for it. Just about every study ranking cities according to liveability (and there are a lot) tends to place the Kiwi capital near the top of the table. Indeed, just last year, the UN-backed International Awards for Liveable Communities handed Wellington the top gong for being the planet’s best small city to live in during 2012.

It’s a truly alive city, and not just because of the refreshing Roaring Forties winds that regularly blow through the streets, rarely making drowsiness an option. As well as its picturesque setting amidst the sparkling water and plunging valleys, the roads are lined with a far higher than average number of intriguing and original sculptures and street art.

Even the unusual wooden government buildings, centred around the modernist Beehive, are hard not to stop and gawp at. Distinctly ugly, but undeniably unique, the Beehive is most definitely from the love-it-or-hate-it school of architecture. However, it’s when Wellingtonians are off duty that the world’s most southerly and remote national capital really comes into its own. 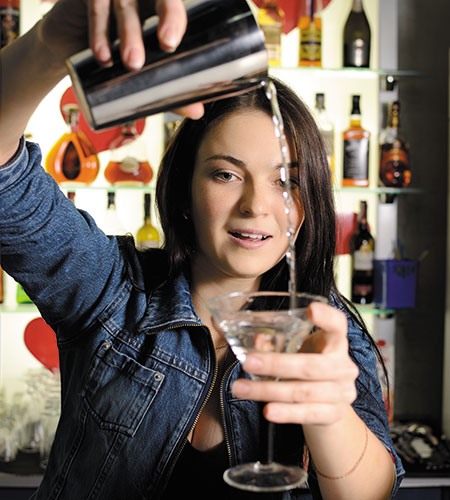 Perhaps the single most amazing fact about this city is that Wellington has more bars, cafés and restaurants per capita than New York. Amazing, that is, until you spend some time walking the city’s streets.

Whatever the reason, whether it be down to its political and cultural superiority, or having an average income easily above the Kiwi median, you won’t struggle to find something up your street, whatever your taste or budget.

Wellington’s finest eateries are consistently rewarded with gongs for being New Zealand’s best, so if you’re not worried about crippling your credit limit, you’ve got plenty of choice. Check out Hippopotamus (hippopotamus.co.nz) at the Museum Hotel, or really swank it up at Martin Bosley’s Yacht Club (martin-bosley.com), overlooking Oriental Bay. 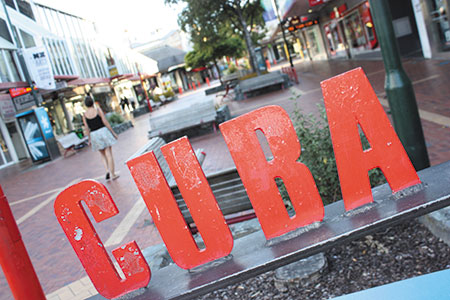 And yet the real joy of the capital is in discovering the tucked-away bars and bistros that pop up around every corner. Wellington is a foodies’ heaven and, whatever your budget, you won’t struggle to find a tasty meal.

The biggest concentration of social spots can be found along Cuba Street. One local favourite is Satay Kingdom, or SKs. Famed for its cheap prices, perky staff and great atmosphere, the Mee Goreng is legendary. If you can’t get a table, jump in almost any other eatery on the Left Bank, the boho laneway off Cuba Street.

Wellington is an infectious place and, like the Waterloo-conquering Duke from whom it takes its name, it’s hard not to bask in its glory. Urbane and cultured, with an added slice of bohemia and yet an almost small-town feel, Wellington is also perfectly placed. Just a few hours’ drive to the north and you hit New Zealand’s biggest urban centre, Auckland, while a quick ferry ride in the opposite direction and you have all the beauty and excitement of South Island laid out before you. As the more pun-happy locals like to say, all’s well that ends Wellington. 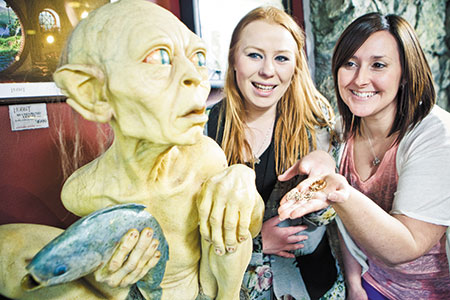 Welcome to Wellywood (aka gollum’s hometown)

Thanks in large part to local hero Peter Jackson, Wellington has carved out a growing niche for itself in the movie-making world, with the result that eastern suburb Miramar has adopted the nickname ‘Wellywood’. There are even proposals to erect a Hollywood-style sign.

The industry is based primarily around the Weta Workshop, the brainchild of special effects genius Richard Taylor, another local boy. Well-known among the screen set since the late Eighties, it was The Lord Of The Rings trilogy that really put the studio’s groundbreaking techniques on the world stage and since then, there’s been no looking back.

As such, stepping inside the Weta Cave is a must for film buffs. The free mini-museum is crammed with the props and characters from Weta’s films, as well as the stories behind them.  wetanz.com 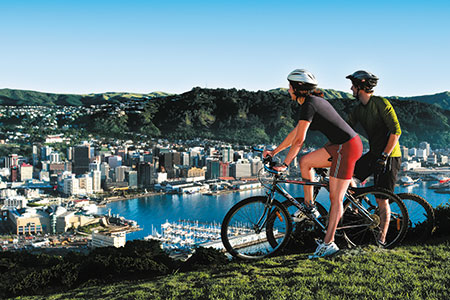 Escape the crowds with these daytrips

One of the many benefits of Wellington being such a compact city is that it’s even easier to escape the bright lights and explore some of its dramatic surroundings.

The simplest option is to jump on the iconic red cable car that has been creaking its way up the hill to Kelburn for over a century. Gardens spread over 25 hectares await you at the top, along with spectacular vistas across the city. 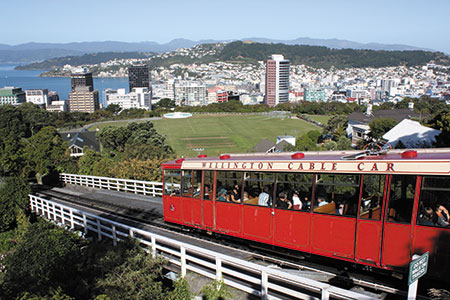 If it is views you’re after, you’ll struggle to do better than Mt Victoria. Either jump on a bus, a bike or walk up to the peak, which sits 196m above the water.

An hour’s drive from the city, the Kapiti Coast has good beaches, friendly locals and a mountain range well worth exploring. A local favourite is Paraparaumu Beach, which overlooks the impressive Kapiti Island, a bird sanctuary for many rare species.

The Wairarapa’s boutique wine village is just a short drive away and boasts more than 20 wineries. As well as its wine, olive groves and plentiful sheep, Wairarapa is also a famed surf spot.

Libya: Elections to be held ‘within 18 months’