Come 8am, however, and it’s more no brain than no brainer. Oh, Magnums Bar, what have you done to me? Rushing off for my day trip on the reef, my gurgling stomach is less than impressed.

Reaching my pickup point ahead of time, I sit and soak up the brilliant morning sunshine while gingerly sipping water to ease my pain. A Canadian guy comes over to me, looking like he wants a conversation. I shoot him a look. If I open my mouth, it could be more than words that leak out.

My minibus arrives. Out jumps clipboard guy, face covered half in zinc, half in beard. Just about managing to tell him my name without vomiting on his thongs, I jump inside, cringing when I spot my new Canadian buddy has followed. 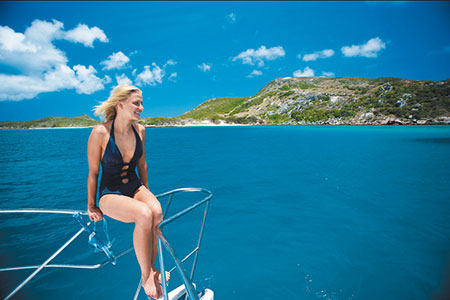 Call of the Wild

Within minutes we’re at the jetty, the sun twinkling off the placid water with the distant Whitsundays spreading out towards the horizon. I find my boat, Wild Thing, and climb aboard. Joining me are a family, a group of 20–somethings up from the Gold Coast, other backpackers and three French women who don’t speak much English. The Canadian, I notice with a sigh of relief, is nowhere to be seen.

We get going, cruising calmly out between the luxury yachts and budget fishing tinnies as skipper Tristan and tour guide Cam get introduced. It’s a spectacular ride, gliding through the first of the idyllic 74 Whitsunday islands, the spray refreshing my hungover face. Twenty minutes in, Tristan gives the signal – we’ve arrived at our first snorkel site, a secret spot off Hook Island.

I’m first off the boat and into the water, which is warm and crystal clear. The formations of colourful coral under the water are incredible, stretching right the way around the island, as far as I can see. Joining us are hundreds of fish – of all shapes, sizes and hues – which dart around and beneath us.

We lose an hour floating around. Tristan throws a few inflatable noodles out to people, while Cam brings out his GoPro camera and dives underwater, filming us as we give a cheesy thumbs-up. The snorkelling proves to be an ice breaker – by the time we’re back on Wild Thing and motoring off to our next spot, the banter is flowing easily. I even throw a little schoolboy French at the group of Gallic travellers, much to their amusement. 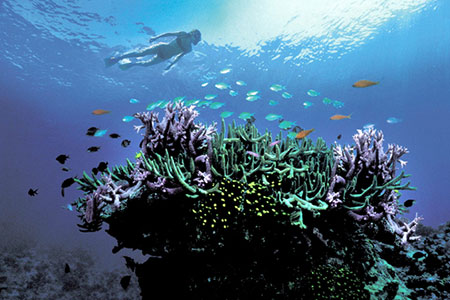 Manta Ray Bay, the second of our snorkel spots, is even better than the first. For starters, there’s a bloody great big humphead wrasse moving around the boat. I’m no fish expert, but this is an impressive specimen. He’s also very friendly, swimming close to us, all while hundreds of smaller fish shimmer past in clouds of silver and yellow scales.

Cam’s back in the water; his GoPro capturing the awed look on our faces as we follow the giant, rainbow-coloured fish as he gracefully floats around us. Tristan, still on board, throws handfuls of food into groups of snorkellers and cackles with mirth as they get swamped by hungry fishes. The squeals of girls who fall prey to Tristan’s pranks only encourage him more.

It’s then time for the headline act, so we power out to one of the planet’s most famous beaches – the scalding white silica sands of Whitehaven Bay. Pulling up at low tide, the postcards do not lie – it’s stunning. We wade the last 10 metres on to the cake-mix-soft pristine beach before Cam leads us to a lookout above the sand, past mangrove swamps and up into thick jungle. From here, it’s a clear view across the beach, and I even spot shadows gliding through the water – baby manta rays going for their lunchtime swim.

Thankfully, there’s enough time for a quick sunbake, during which I manage to shake off the last of the night before, then it’s time to make the return trip to Airlie.

En route, we discover how Wild Thing got its name – just before we pull back into the marina, Tristan shouts for everyone to hold on to something, before throwing the boat about in fast arcs that shoot cascades of water high into the air. It’s a great way to end a fantastic day. 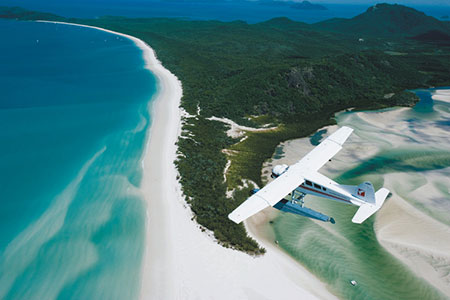 From one extreme to another, next on the agenda is seeing the islands and reef from up above, rather than down below, and I head out to a small airfield just outside Airlie.

I’m not exactly a light aircraft enthusiast. To say I’m scared of flying would be a bit extreme, but there is something about small, propeller aircraft that I find unsettling.

So, insides quivering, I give pilot Shaun a manly handshake and gruff, “G’day mate” –  apparently Queenslanders approve of that sort of thing. It’s sometime around the lifejacket briefing that my façade slips. Badly. I clip the thing on back to front and, when Shaun points it out, my hands shake a bit too much to correct the error themselves (nothing to do with the booze consumed the night before, of course). 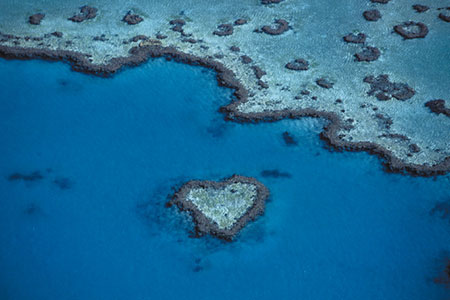 In short, he has to do it for me. How embarrassing. Perhaps nervous of letting me out of his sight, Shaun then invites me to sit in the co-pilot’s seat, with the pedals at my feet and the prop-control stick within arm’s reach. I’m terrified of accidentally messing with the equipment and plunging us all towards a watery death.

And yet my fears are quickly dispelled the second we take off. We soon reach 8000 metres with barely a breath of wind, and besides, the view is so incredible that I’m too busy taking photos to worry. Ten minutes later, we pass the Whitsundays and bear down on the spectacular Great Barrier Reef, which from this height, I can see in all its glory, as it stretches out for miles, surrounded by perfect turquoise waters.

Shaun brings the plane below 1000 metres so we can better see the intricate formations below the surface. We also make a low pass over one of the most famous shape – the romantically named Heart Reef. Unsurprisingly, the plane fills with a chorus of “oohs” and “aahs” as camera shutters whirl and click to capture this once-in-a-lifetime shot. 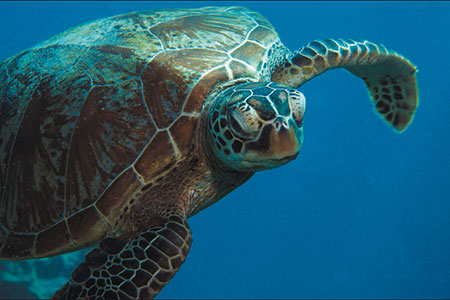 Back on solid ground, I venture 30 minutes out of town in search of a beautiful hideaway I’ve heard about – Cedar Creek Falls. Unfortunately, it very nearly doesn’t happen – word to the wise, if you can’t drive a manual car, you can’t drive a Mini Moke beach buggy… but, you can ride a turbo-charged Jeep, so I’m off!

This natural fresh water lagoon is incredibly popular with locals – and now I know why. A spectacular waterfall powers into a large rock pool surrounded by lush rainforest, making it the perfect place to cool off in the afternoon sun. The time flies by – as do the daredevils ignoring the safety signs to take the plunge from the top into Cedar Creek’s icey waters. Saying goodbye to the Jeep is painful. I love that car.

With not long left, I’ve got just one last Whitsundays stop to make. After all, I figure I’ve earned a bit of luxury after so much hard work. And so it’s on to the ferry to Long Island Resort. It’s a place where you can get the VIP resort treatment without destroying your budget, which means I don’t need much persuading. I consider the jet skiing, kayaking and diving, but somehow the hammock on the private beach just looks a little bit more tempting… 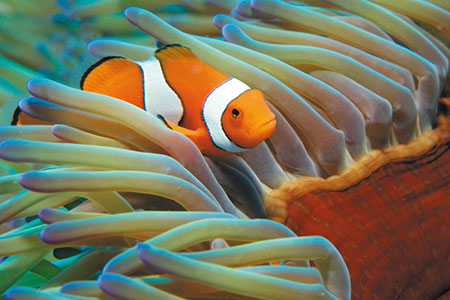 The Whitsundays are rightly considered a fantastic location for diving, especially for beginners. Here are three more Aussie dive sites not to be missed.

Tell me more: Sunk in a 1911 cyclone, along with its 122 passengers and crew, the SS Yongala was found during WWII but remains in excellent condition. It’s also home to a huge wealth of sealife.

Where: Between Townsville and Magnetic Island. 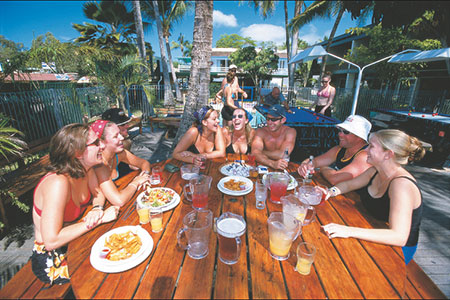 In a nutshell: Better than the Great Barrier Reef?

Tell me more: It might be much smaller than the GBR, but this reef is nearer the coast, the Indian Ocean waters are warmer and there are far fewer tourists. Better yet, Coral Bay has probably one of the most spectacular beaches you’ll find. Oh, and did we mention whale sharks (April to July)?

Where: The closest main town is Exmouth, WA.

In a nutshell: Meet the real Jaws.

Tell me more: Jump in a metal cage to come face-to-face with great white sharks, in the actual place where the real stars of the original Jaws movie were filmed (albeit with a midget in a mini cage!).

‘Do you know who I am?’ Olympics minister denied entry to media centre after forgetting pass

Kate Middleton: ‘I’ll give this to my d, d, baby’ – did the Duchess of Cambridge let slip the gender of the royal baby?